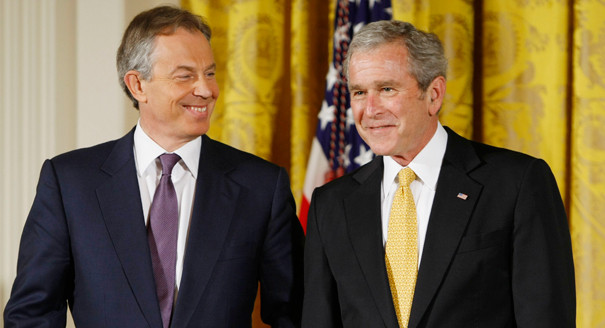 AS THE distressing scenes continue to unfold during the ongoing evacuations at Kabul airport one proposed diplomatic measure is receiving increased support as a Taliban mandated deadline for evacuations closes in.

“Wait a minute, we know just the guys,” large swathes of the world said in unison, “they have all the answers and take none of the blame – so they can’t fail. Hey guys, fire up the chopper”.

Tasked with negotiating with the Taliban directly to extend the deadline for evacuations Tony Blair and George W Bush, dubbed The B Team, could be dropped out into the heart of Kabul by the end of today.

“They were so quick to issue statements to say ‘very sad, but definitely not our fault’ when the Taliban advanced once again, so surely dropping them in would make sense. But we don’t want to spook the Taliban though, they should travel light; no translators, no comms. Just the T-Dog and Georgie Boy doing what they do best – stabilising the Middle East,” offered another supporter of the proposal.

“Blair called Biden’s withdrawal ‘imbecilic, tragic, dangerous and unnecessary’ and he should know a thing or two about that, he has the blood of a million plus Middle Eastern civilians on his hands. Once they’re sipping chai with Abdul Qahar Balkhi, they’ll be able to reason with him and his heavily armed bodyguards”.

Once dropped into Kabul, it is suggested the pair make the trip to the familiar ground of Bagram Airbase, the site at which US soldiers tortured prisoners, for the meet up with the Taliban.

The 100 million people who have already signed the ‘Tony and George’s Middle East Reunion’ petition deny it is an elaborate ‘swapsies’ ploy which will see safe passage for thousands of refugees in exchange for Blair and Bush.