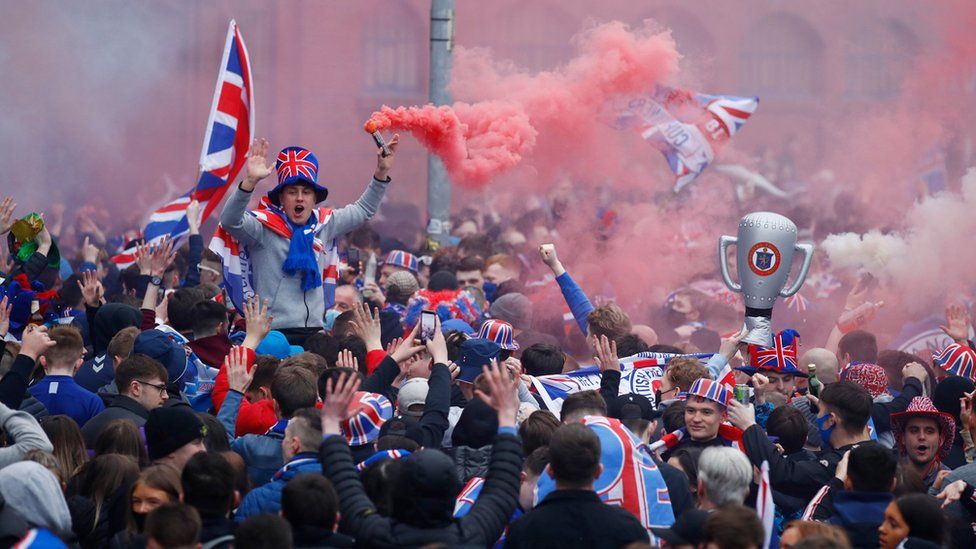 THE WORRYING sight of large crowds of celebrating Rangers supporters in Glasgow and on the Shankhill Road in Belfast prompted criticism from authorities and Celtic fans, who can’t believe their arch rivals would so selfishly risk everyone’s collective health and jeopardise the progress made in the fight against Covid-19.

“Shameful stuff,” confirmed one Celtic supporter who confirmed he would have celebrated a historic, never before achieved 10-in-a-row title win all by himself.

“Aye, tanning some tins on the couch, nae putting anyone at risk but that’s just the Bhoys through and through, real community club, unlike them bastards,” confirmed the fan, who omitted the fact he cancelled plans for a Celtic 10-in-a-row themed carnival once he saw Shane Duffy in defence.

“A woulda done a wee blow of a one o’them wee party flutes, but sat meself in the dark alone ‘cus I care fae your families, unlike you lot oot there with your tongues glued to Steven Gerard’s arsehole,” confirmed another Celtic supporter who was delighted his hatred of Rangers dovetailed nicely with lording it over the moral high ground during a pandemic.

Yet more Celtic 10-in-a-row title winning celebrations that would have gone ahead instead of mass gathering included fans donating their own vaccines to developing nations, sewing PPE for nurses, spending money ear marked for bottles of Bucky on food for the needy and voodoo dolls of Alfredo Morelos.

Elsewhere, one or two Celtic fans conceded they can understand the celebrations as it was Rangers first ever league win in their 10 years of existing as a club.