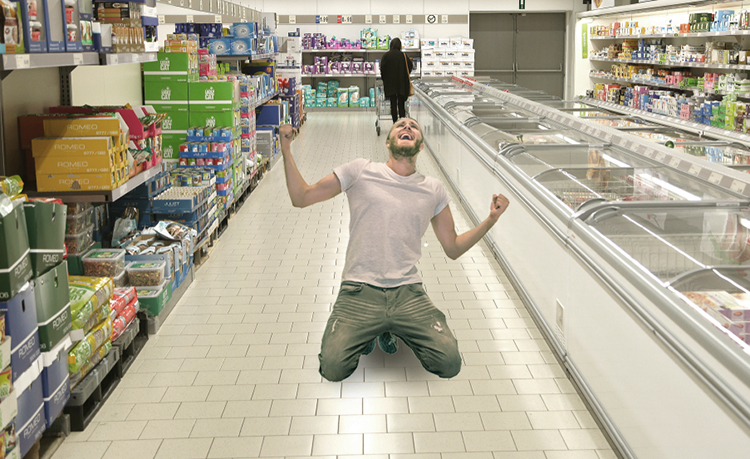 NOT WILLING to believe the devastating news until he saw it with his own eyes, local man Thomas Cartons dropped to his knees and let out a mournful cry in his local Aldi that could be heard for miles around.

“We know not what we do,” Cartons whispered, shortly after regaining consciousness from fainting at the lack of middle aisle products.

Dizzy and not making any discernible sense as he tried to process what he saw, Cartons described the latest devastating 2020 development; the removal of all manner of mad stuff on sale, as ‘the rocket launcher that finally broke the camel’s testicles’.

“That middle aisle was the only thing keeping me sane, the only bright spot on this Godforsaken planet. Not essential? You bastards, it’s the only essential thing,” Cartons said, fondly recalling his most recent purchases which included a Famine-era thatch roof home-assembly DIY kit, and some sort of food blender that was also a hoover and a trampoline.

Frozen on the spot before the covered over middle aisle deemed non-essential under Level 5, in scenes repeated throughout the nation’s Aldi and Lidl outlets security asked that Cartons collect himself and get on with his day while placing a ‘caution wet floor’ sign on the spot where Cartons had been crying for several hours.

“I’ll leave when I’m good and ready,” Cartons said using handcuffs he got in the middle aisle last year to lock himself to the exact spot where he bought a discounted NASA approved space suit and one of those yokes that chops up onions real handy just last week.

The move to temporarily close the middle aisle is set to cost many bargain hunters their sanity but save their bank balances from ruination.