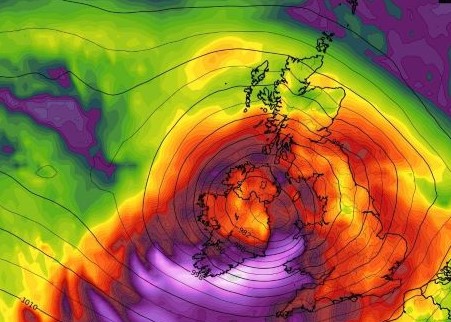 A STATUS orange rainfall warning is to remain in place for the rest of your miserable life so you better get used to it, Met Éireann has said at a press conference today.

“Heavy rain mixed with wind is expected to dominate the majority of your existence on this forsaken island and if you have any delusions contrary to that fact then you should probably just move somewhere a bit warmer and less on the edge of the Atlantic ocean,” a fed up Met Eireann spokesman explained.

With storm after storm battering the country one after the other throughout the year, the Irish National Meteorological Service suggested naming the weather fronts a ‘storm centipede’, as opposed to one individual name for every storm that comes thrashing around.

“The storms are basically sucking out of each others arseholes and creating a long line of warnings for us to name, which is becoming a bit tedious at this stage,” the spokesman added, sighing deeply with the thoughts of yet another Winter ahead of spewing the ‘same auld shite’.

“Just take it from here on in that there will be a constant stream of status yellow rain or wind warnings in place and try to somehow compartmentalise that fact with all the other God awful things going on in your miserable lives,” he said, before throwing a coloured satellite image of  Ireland with a storm approaching at reporters, “here, just use that image for every storm from now on. I’m not wasting anymore printer ink on this crap, it’s always the bloody same anyway”.