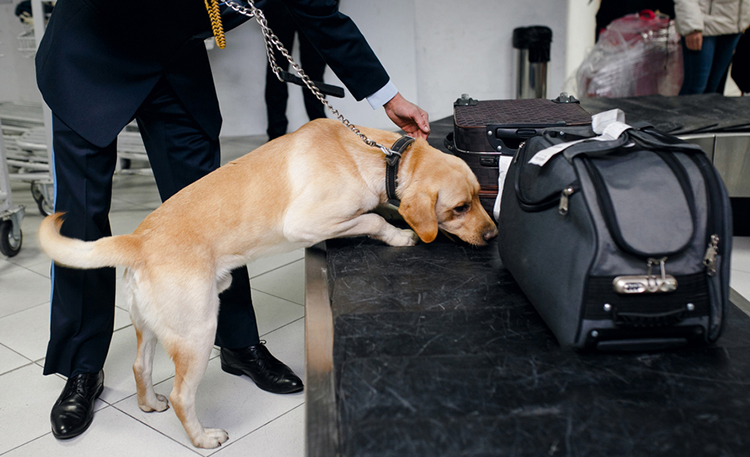 RAT BASTARD dogs working for revenue have seized drugs worth over €50k at a Dublin parcel hub today, despite not being paid any money for their touting.

Snitches Bailey and Sam sat proudly as they uncovered 2 kilos of herbal cannabis and 10 kilos of cannabis infused sweets, stating they will rat out anyone for the price of a doggy treat.

“Is using my addiction to uncover contraband to supply other people’s addiction a bit hypocritical? Yes, but you’ve never tasted these dog biscuits man, they’re trippy as fuck,” Bailey explained his logic and crippling addiction, “I almost piss myself when my handler pulls out that sweet ass treat. I don’t even know his fucking name, man. I just call him my dealer”.

Responsible for a string of major drug stings across the country, the dogs said they were not scared of any criminal repercussions over their blatant touting.

“They say snitches get stitches, but I’ve had my balls removed, dude,” Sam reveals, “my fucking testicles were ripped off. Have you any idea how much that shit hurts by the way and how frustrating it is? When you have your nuts chopped you don’t care anymore about anything. Just kill me already. I fucking beg them”.

Destined to continue ratting out parcels, people at airports and shipping containers for the next few dog years, Bailey and Sam said they look forward to retiring in their later life and just eating as many treats as they can.

“I’ve heard from other dogs that they just get treats every day for doing nothing – that’s the kind of life I want, man, none of this working for the man bullshit,” Bailey concluded, taking a dump on the ground before licking his arse clean.