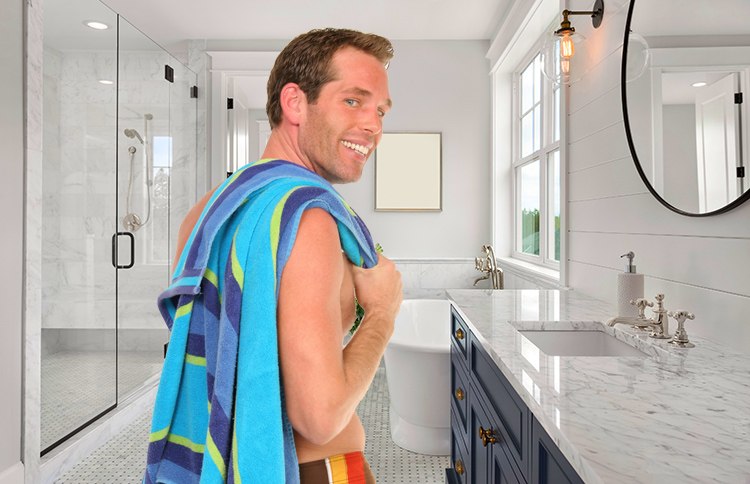 A COUNTY Waterford man has thanked the unknown makers of a bathroom towel he has had for the past three decades in a moving tribute today, likening the absorbent cotton fabric body dryer to the direct equivalent of a woman having a favourite bra, WWN reports.

Speaking from his home earlier today, Reece Tobin admitted to previously under appreciating the now faded beach towel which he somehow acquired in the mid noughties.

“It just sort of appeared out of nowhere and landed in my possession,” Tobin explained the towels origins, which is older than all of his three children, “you just don’t realise how old something like a towel is until you actually sit down and think about it. Like, how many arses has it dried, or indeed, how many times I’ve dried my own face where someone else has dried their arse – it’s a true mystery”.

In one instance, the 42-year-old recalled a time when a former girlfriend threatened to throw out the towel on him, forcing the accountant to make some tough decisions.

“It was either the towel or her and of course I chose the towel,” Tobin added, now flaking off bits of dried skin from the towel which originated from between his toes last week, “sure, it has an always damp, never dry smell since, but it’s stayed with me through thick and thin, not like that bitch Jane!”

The grandson-of-four went on to point out that there are some things in life you only ever need to buy one of.

“Can opener, Tate & Lyle Golden Syrup and a big blue and yellow beach towel are probably the most important things you’ll continue to own, and of course those canned steak and kidney pies with the mushy pastry on top,” he concluded.