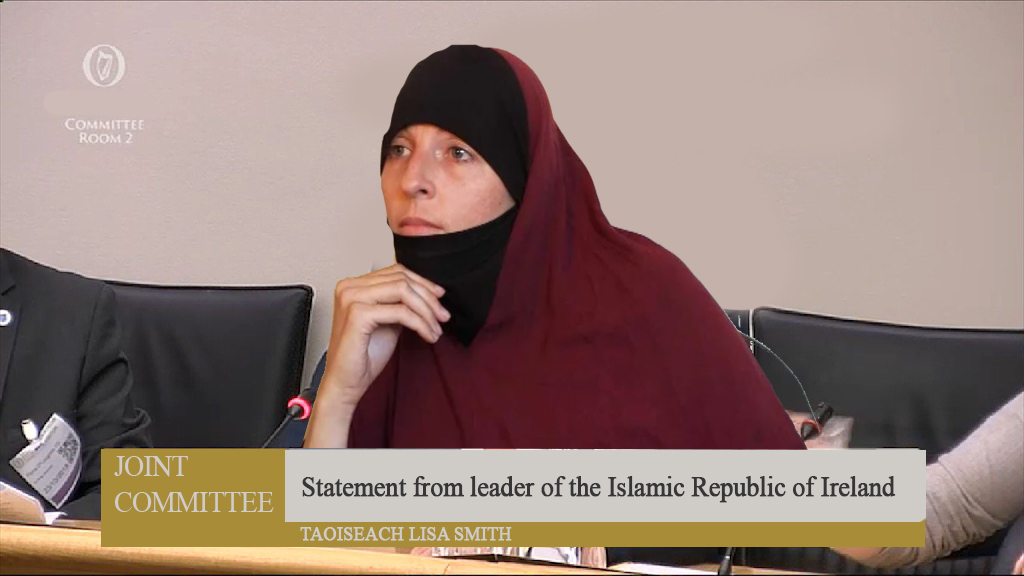 FUTUREWATCH: where we take a glimpse into the Ireland of tomorrow using state of the art technology that fell off the back of a truck earmarked for a US military research facility.

The year is 2030 and Ireland elects its first female Taoiseach to rule over the recently renamed Islamic Republic of Ireland.

“We should have listened to that one guy in the comment sections of The Journal back in 2019. He even quit his job to go full time moaning about her in the comments, but we would listen? No. We were too arrogant and lost in our Dublin bourgeois bubble. Well, look at what happened!” shared a defeated looking former member of the open borders liberal lefty looney squad.

The warning signs were there: Smith was granted planning permission to convert Leinster House into a giant mosque while still on that controversial flight home to Ireland from a Turkish prison.

Concerned citizens submitted objections but those were soon dropped when Smith was permitted to build a mosque on the face of one objector, Cyril Costigan.

Later Costigan (71) would apologise to Smith stating the Islamic Republic of Ireland and its suffocating oppression reminded him of the lovely Ireland of his youth and he was glad to have it back.

‘Surely any individual involved with the Islamic State would face criminal prosecution upon returning to Ireland?’ we hear those of you back in the idyllic past of 2019 asking. As everyone knows Ireland staged a successful referendum on leaving the EU and joining the then resurgent Caliphate in early 2021 and thus plans for any such legal repercussions were shelved.

Idiotic politicians had initially staged the referendum to distract from myriad crises and thought it would never pass.

To better understand 2030 as a period of time you have to be aware people were more open to a radical shift in direction. The temporary homeless and health crises of the past remained permanently temporary. Eventually people warmed to Donald Trump during his fourth term, Britain still hadn’t left the EU, and the Climate Change hoax had been exposed after it was revealed Greta Thunberg was a 69-year-old scam artist with a particularly good skincare regime.

As your racist uncle had always correctly forewarned Ireland was ‘full of Islamic jihadist sleeper cells, even Carmel down in the post office has joined’ and so all 16 million secret Muslims in Ireland voted in favour of the referendum, altering the country forever.

By 2030, the Islamic Republic of Ireland had its first female Taoiseach and the public were ready to protest, however, after a video from an American TV station spoke about how great the Irish were for electing a woman went viral, the public let it go to their heads and decided to bask in that praise instead.

Over time citizens got used the stonings received for having a Guinness or a packet of Tayto, and while the language was tough to master we all got used to speaking Irish again. Other changes were rapid: the police force was renamed An Garda Shariachana. The angelus broadcast live from Mecca. The landmass of Ireland itself was moved by 33 degrees by large trawler to correctly face toward Mecca. The constant worship on prayer mats doubled up as intense Yoga and did wonders for people with bad backs. Mohamed was now the most popular name for boys, girls and pet goldfish.

Despite all the warnings, Ireland was helpess against the march of Taoiseach Lisa Smith.