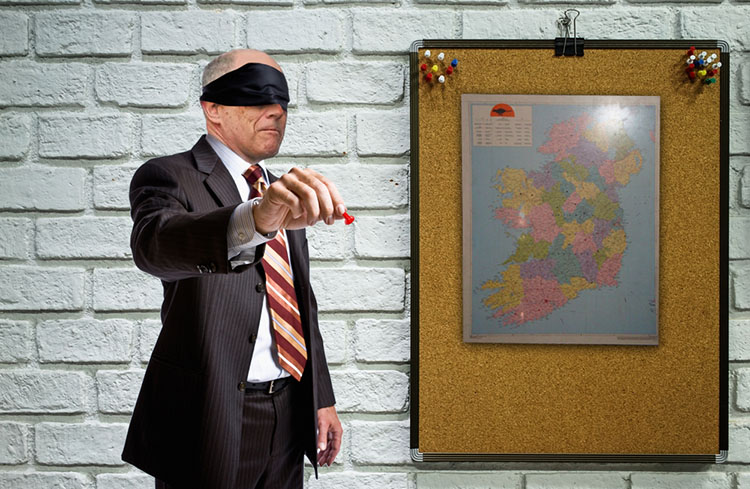 CAREFULLY tightening his well worn blindfold, Irish Immigration Minister David Stanton felt his way to a notice board on his office wall where a map of Ireland hung proudly, littered with previous holes from failed endeavours.

“Okay, keep left, Dave, you don’t want to hit Dublin – they’d feel too at home in a multicultural city like Dublin – keep West,” he began before puncturing the board with a red drawing pin and lifting his blindfold in anticipation, “ah balls, Oughterard again, why do I keep hitting fecking Oughterard?”.

Relying only on blind fate to make his decisions for him, Stanton began to panic now as pressure mounted to find a decent, loving location on the island of Ireland that will allow the government to house asylum seekers, albeit in questionable conditions, while wondering why there was so much backlash for every decision his department has made so far.

“It’s like people from rural Ireland have direct, firsthand experience of the government providing inadequate supports and outlets for people in need,” Stanton mumbled to himself, now making a fourth attempt to ‘pin the donkey on the culchies’, as he liked to call it, “ah ha, Ballinamore, county Leitrim! This is a sure fired winner”.

Just 0.3 seconds after his pinning, Stanton’s phone began ringing in his pocket, a call he was already familiar with.

“I just pinned it there now, how are they protesting there already?” he asked the voice on the other end of the line, “a traveling band of racists?… yellow vests… lobbying and exploiting unsuspecting locals?… inciting racist fearmongering?… okay, I’ll go again, but I’m running out of pins here and this blindfold is starting to itch”.

This time hitting Achill Island, the now exhausted Immigration Minister didn’t even get a chance to look at the map before his phone rang again.

“Nope, that’s it, I’ll just leave this mess up to the next poor eejit who gets this job,” he thought, before declining the call, and calling it a day.