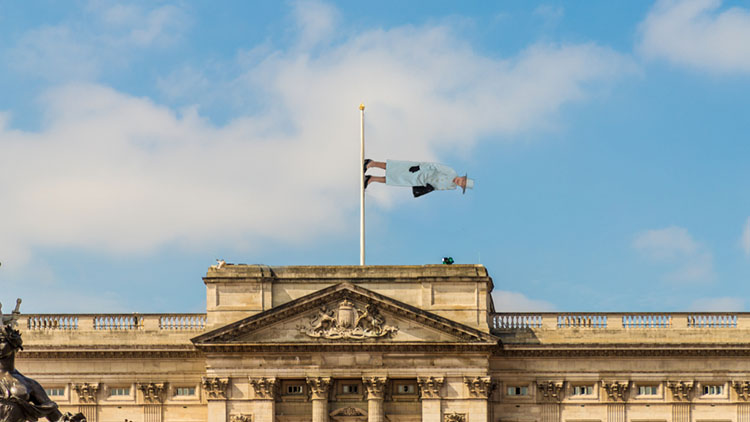 AHEAD of her speech to the British parliament, the Queen will be flown at half mast to signify the grave and ever worsening circumstances surrounding Brexit and the chaos wrought by the Boris Johnson government.

The Queen became only the second British monarch to be flown at half mast; the first being King Edward III, who was erected halfway during the Black Death to mark the deaths of millions of people, and more importantly to keep the monarch out of harms way.

“I think she looks kind of cute up there,” said one Londoner, “it’s just a shame her skirt keeps blowing over her head like that, it’s kinda degrading”.

The Queen will be kept perched atop the flag pole as part of the ceremonial practice until such a time as things improve and Brexit stops resembling a script for the sequel to ‘Joker’, meaning the Queen could be up there indefinitely.

“At least with the Queen that high up a flagpole, Boris can’t possibly repeatedly lie to her face again,” concluded one Johnson aide desperately trying to stop the PM from placing a ladder on the flagpole flying the queen.