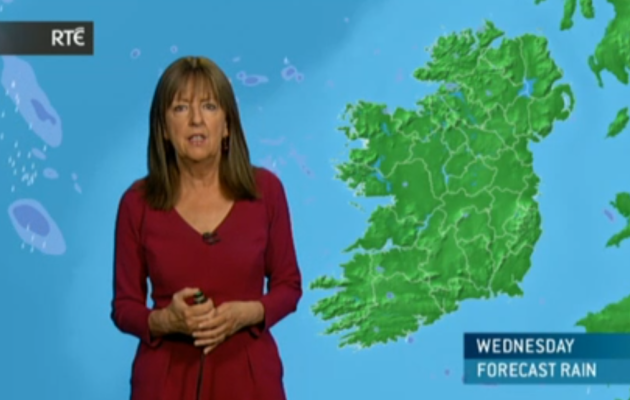 MET ÉIREANN’s shining beacon of weather knowledge Evelyn Cusack has been forced to deny claims she has completely fabricated the existence of Storm Lorenzo all so she can just get a bit of air time on the telly, WWN can reveal.

Rumours had been circulating that Cusack had become addicted to high profile appearances on TV where she administered important weather information to the public, and in a bid to rediscover this, had fabricated a brand new weather system.

“She started making up bullshit terms, to make the storm sound more sinister, stuff like ‘convective spells’ and ‘swirly whirly blowy woahy winds’. And she would have gotten away with it too, if it weren’t for the fact we can all see out windows and look at weather,” explained an anonymous colleague.

Suspicions were first raised after a colleague of Cusack’s pointed out ‘who’d call a hurricane Lorenzo?’ and the fact that Azores Island where Lorenzo allegedly first hit is a fictional place in George R.R. Martin’s Game of Thrones books.

What at first might seem like a harmless attempt to get on the telly has not been without its victims. “She was mad jealous when Teresa Mannion got that Northface jacket modeling contract and the L’Oreal deal,” added the colleague.

Mannion was found impaled on a fence post on the west coast during a routine weather report with the words ‘it’s my time to shine now, bitch, you’re not even a proper weather forecaster’ written in blood.

In response to this horrific incident a blood soaked Cusack claimed “the storm did it” and demanded she be given a 5-hour interview on The Late Late Show.