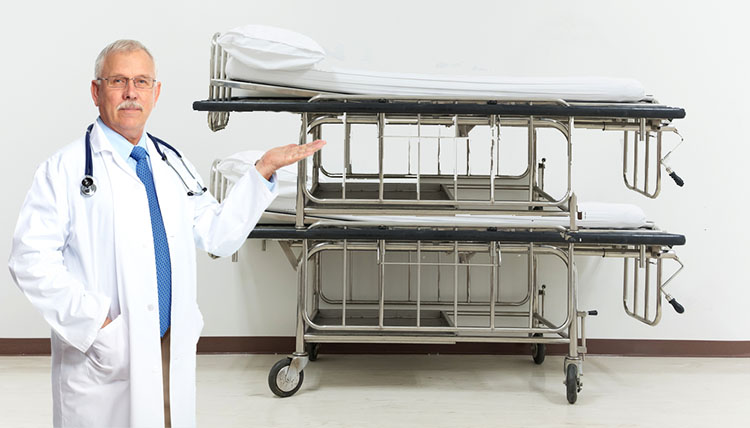 ACTING on record levels of hospital overcrowding, the Health Minister Simon Harris in conjunction with the HSE has unveiled a €3bn investment into ‘bunk bed trolleys’ which are expected to half the number of people waiting on hospital trolleys in only a matter of weeks.

Technically classed as one unit, the new bunk trolleys will bring the monthly figure down from 10,000 trolleys to 5,000 hospital trolleys being used to cater for patients waiting to be treated across the country.

“The solution was just staring us in the face this whole time,” a rather chuffed with himself Simon Harris told WWN at the launch. “The great thing about bunk trolleys is patients will never be lonely and can even help each other out when it comes to carrying out small medical tasks like blood tests or CPR, thus freeing up doctors and nurses to focus on the private patients with insurance.

A 72-year-old Waterford woman who spent 100 plus hours on a trolley last week has since welcomed the new double-decker solution, stating that having a bunk partner will pass the time quicker, if they’re still alive.

“There’s nothing more awkward than lying on a trolley in a hospital corridor while people try to operate the vending machine beside you,” she explained, “at least now when someone asks for change for a Twix they’ll have another person to ask instead of me”.

The HSE confirmed it will also look into reducing trolley figures even further by trialing triple bunk trolleys, but admitted it will need to raise the roof on all its hospitals at a modest cost of 56 billion euros.