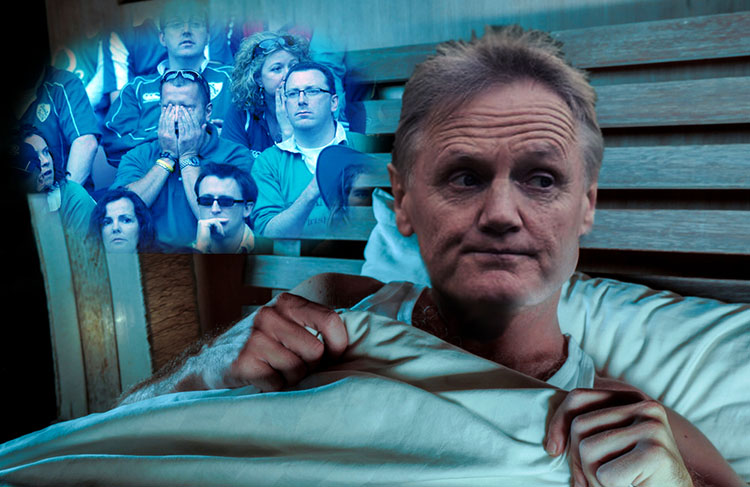 IRELAND COACH Joe Schmidt’s attempts to mastermind a return to form in the aftermath of a 57-17 demolition at the hands of England has been interrupted by the arrival of the spooky ghost of the 2007 World Cup where a dismal Ireland were knocked out at the group stages.

Sweating from his brow after bolting upright in bed Schmidt, feeling an icy cold presence in the room, muttered ‘wh-who’s there?’ as his teeth chattered, fearful some malevolent force had entered his room.

“It is I, the Ghost of the 2007 World Cup,” beamed a figure in the shape of lacklustre defeats to France and Argentina. Hovering over Schmidt, the ghost spoke of terrifying, blood-curdling things such as top players being ‘out of form’, ‘shattered confidence’ and a playing style that could be described as ‘predictable, boring and generally shite’.

Schmidt made the case for why the Irish team of 2019 is nothing like 2007 with a meandering nonsensical monologue about volume of work in players’ legs while also pointing out Scotland where in Ireland’s group.

“That’s what they said about Argentina in 2007,” the ghost screeched back, forcing the blood to drain from Schmidt’s face as he contemplated the horrors that awaited him and his team in Japan.

The ghost’s presence in Schmidt’s room will be of serious worry to Irish rugby fans, who still get crippling flashbacks to Ireland only beating Georgia, yes Georgia, 14-10 as Ireland’s star studded team all failed to perform in the 2007 version of rugby’s biggest tournament.

However, the pressure on Schmidt’s team has been alleviated somewhat by the news that some fans have put the Irish rugby bandwagon up for sale on eBay even though the country is currently one giant advertisement for the 2019 World Cup.