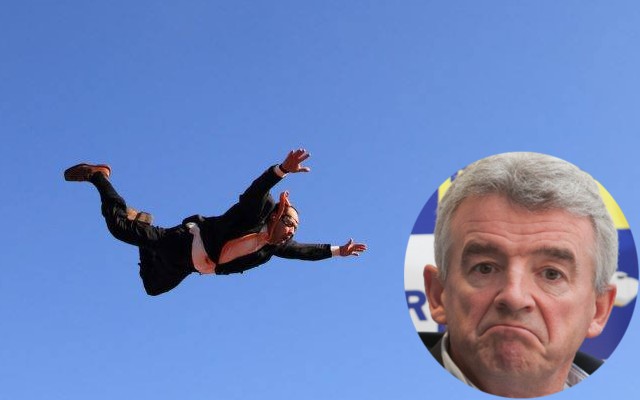 RYANAIR head honcho Michael O’Leary has made his position clear on potential pilot strikes at the airline after throwing one parachute-less pilot from the emergency exit door of a Boeing 737 which was at a cruising altitude of 13,000ft, WWN can confirm.

As the pilot plummeted to his death, in a carefully choreographed PR stunt O’Leary is famed for, the screaming man made landfall on a set of giant novelty inflatable bowling pins prompting O’Leary to remark “now that’s what I call a strike” which was greeted by guffaws and laughter from media on board the flight who admitted this was ‘classic O’Leary’.

While the inflatable pins did not stop the pilot from being ground into a bloody pulp upon impact, it did give the 94% of Ryanair pilots who voted in favour of industrial action as they seek better pay and working conditions some food for thought.

O’Leary’s pilot-pushing has received 100% support and backing from holiday makers who booked flights with Ryanair on the days of the proposed strikes.

“Look, I care about every pilots’ wellbeing, working conditions and pay as much as the next guy but whoever is flying the 9.20am flight to Lanzarote Friday week, that prick better fly that fucking thing or there’ll be murder, I’ve been looking forward to passing out in a pool of my own vomit abroad for months,” confirmed one Ryanair customer.