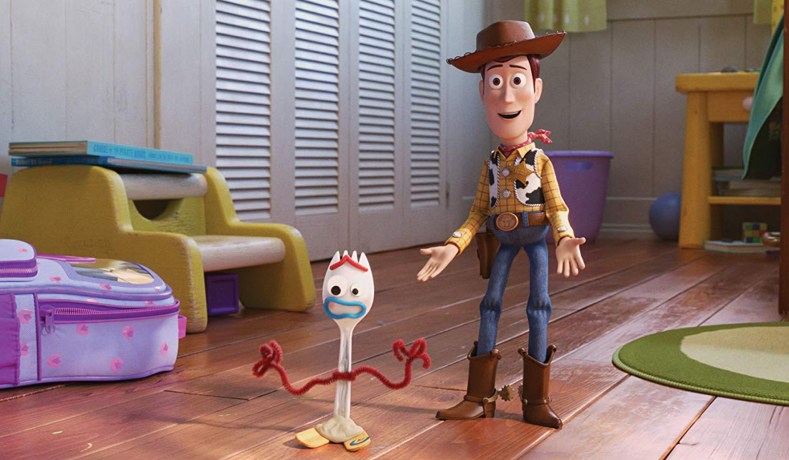 FOR THOSE expecting a review of Toy Story 4 when it came out around 2 months ago, we here at WWN can only apologise. Absolute nightmare getting someone to look after the kids these days.

You know yourself, you make every effort to plan these things ahead of time, but time gets away from you. One of the kids was sick there recently. Then the missus was at her friend’s hen.

And you know, you’d bring the kids to see Toy Story 4 but they’d only ruin the fucking thing with questions and constant trips to the toilet. So we wanted to see the kid’s movie without the fucking kids.

It’s tough going though like, after €25 on tickets, and the popcorn they molest your wallet for and what with O’Brien’s youngest from across the way is charging us to look after the little shits – extortionate fucking prices.

She’s expecting 50 quid for barely a couple of hours work, sure they’re fucking asleep by the time she pops over in the evening. They’re snoring kids, not lethal killing machines in possession of a biological weapon. 50 quid!

50 quid – that’s the price of one big Pepsi in the cinema. Pricks don’t do Coca Cola. Lad behind the counter doesn’t so much as look you in the eye when dealing with you either, no basic manners. But that’s another story.

Anyway, movie was decent enough. Fucking trailers though, huh? Nearly 30 fucking minutes of the things. I’ve just given the shagging cinema money to watch the movie, and get this, some cunt on the ads said ‘now for my favourite bit – the trailers’. English voice on him too. No pal, I’m here to see the bloody film.

Yeah so, anyway, good auld story to it and the fork lad was fairly funny. Sad to see Woody go now in fairness, himself and Buzz were good craic together like.

Those ventriloquist dolls though, jaysus, stuff of nightmares.

Pricks working here didn’t even clean the place in between screenings I’m still picking some littering prick’s discarded popcorn out of the arsehole of my jeans.

Anyhow, love going to the movies, hopefully get the missus’s sister to look after the kids so we don’t have to pay anyone. Although that’s if we can tempt her away from drinking herself to tears on a night out in town. We’ll review her car crash of a love life another day but it’s more tragic than the Titanic in 3-D.

Next time maybe we can go see that new Fast and the Furious. What’s it called Hobb Nobbs and Shawl. Perfect date movie and get another review in; cars and Idris Elba. The missus will be creaming herself looking at the cars and I’ll be fantasising about Idris Elba. Win win.