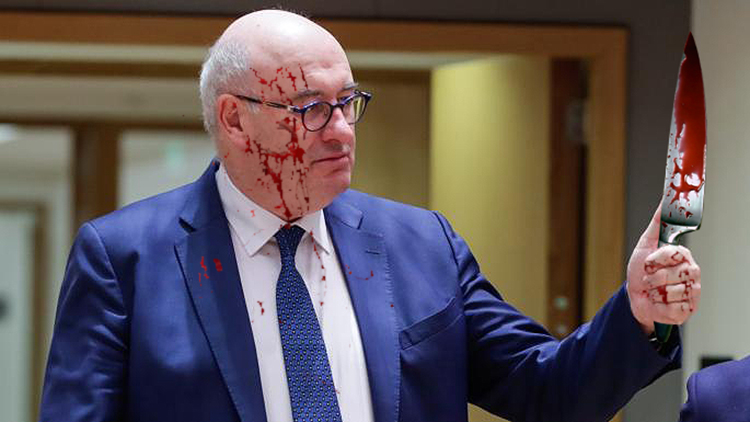 GREETED with a huge round of applause from his EU Commission peers, a bloodied Phil Hogan brandished a large kitchen knife in the air after slaughtering an Irish born calf on the parliament floor, in a move to symbolise cutting ties with Irish farmers and his reappointment as EU Commissioner for another five years.

“Irish beef is dead, viva la South America!” Hogan bellowed as he hacked into the young calf’s neck, now visibly aroused by the power of it all, smearing his own face in blood of the still jerking calf.

“They said I wouldn’t see another term, but the farmers were wrong to doubt me. We are the Alpha, and Omega – the beginning and the end. We are Europe. Now, let us drink the blood of our enemies and unite!” the manic Commissioner added, sadistically licking the sharp edge of the knife while pinching his left nipple.

Mr. Hogan, who has served as the European Commissioner for Agriculture and Rural Affairs since 2014, welcomed a new EU-Mercosur draft deal allowing large quantities of South American meat into European markets, a competition move which could severely damage Irish farmers.

“My 300 grand a year salary won’t change, so what’s their point?” Hogan retorted when asked how he could turn his back on Ireland’s most delicate industry, “I’m 59 years old now, so I’ll be bang right on retirement when I finish this second term, so I literally don’t give a shite at this stage. Hopefully I’ll get a nice directors job with a South American beef company when I leave here”.