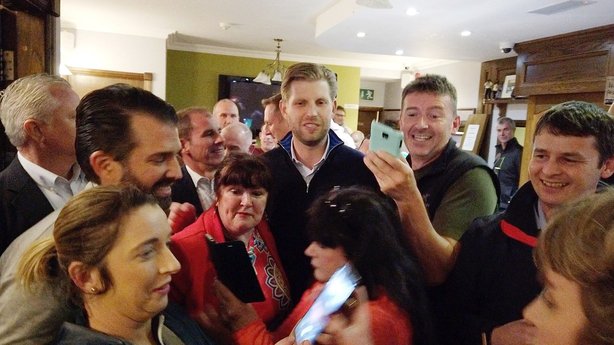 THE REST of Ireland watched on in horror as the Clare village of Doonbeg rejoiced at the arrival of US President Donald Trump, celebrating wildly at his presence in their small village.

Staff manning Ireland’s ‘Embarrassing Locals Making A Holy Show Of The Rest Of Us’ crisis centre alerted the rest of the nation to the gombeen nature of some of the pictures and footage already emanating from Doonbeg, with their worst fears being confirmed.

“Look, it’s one thing to have eejits on the Six One News on RTÉ, we can laugh at them and cope with that. You know, they become little cult heroes. Like the frostbit lad, but these videos and pictures are being beamed to an international audience for feck sake,” explained one mortified Ennis local, as the horrific footage of two of Trump’s non-illegitimate sons drinking in a pub with delighted locals replayed in her head.

“Christ, what will people think. I’ve an old friend from Germany I met traveling in South America, what the fuck I am supposed to say to him when the video of some bog dweller dressed head to toe in a suit made out of Make America Great Again hats? It’s Moneygall on fucking speed!”

Doonbeg has been in lock down on the days leading up to Trump’s arrival, and there is a nationwide consensus that the village should remain shut off from everyone when he leaves.

“I’m not saying forever like, but just until we’ve had a chance to calm down and they get the message that it’s not on, coming across that delighted and desperate, the shtate of them like,” confirmed an urban and sophisticated Dublin resident.