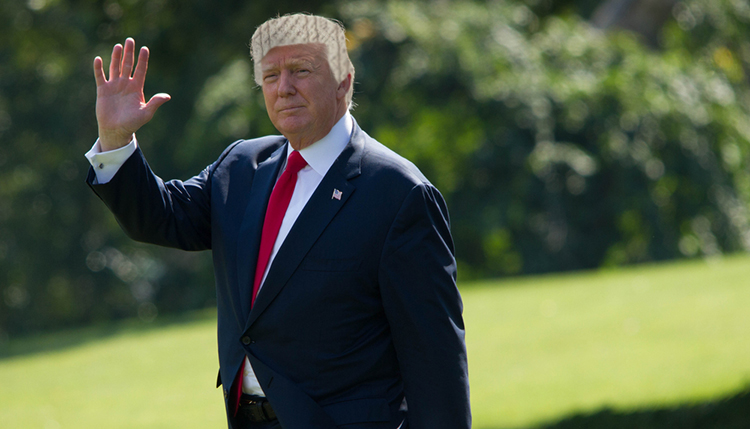 IN ANTICIPATION of his visit to Ireland later this evening, US President Donald Trump has been pictured without his trademark comb over wrap around for the first time while attending the D-Day commemorations.

Pictures seen by WWN and reproduced above show him wearing an Irish made traditional cream-coloured Aran wool wig which was lovingly crafted by Irish milliner Philip Treacy.

“I just hope the president likes it,” shared Treacy, who used the famous Irish wool to create something distinctive yet subtle enough so as not to draw any undue attention.

Cynics and critics of the US president’s impending visit have suggested there is absolutely no way the Irish public is stupid enough to fall for such an obvious ploy to distract people from Trump’s divisive rhetoric and ideology, and myriad troubling scandals.

“What a legend! “He’s gas craic at the end of the day,” said one Irish local, now donning a Make America Great Again hat.

“Always said people were too harsh on him over the sexual assault allegations, the racism, the obstruction of justice, the caging of the kids, the climate change denial, more racism, the psychopathic lying, the tax avoidance, the bankruptcies and the flattering of dictators. Him wearing an Aran wig is good for Irish businesses at the end of the day, we shouldn’t be protesting such a nice man” concluded the local.

Trump himself wouldn’t answer questions on his Aran wool hair, but solemnly remarked upon the D-Day commemorations by stating “we must never forget whatever it is that happened here”.