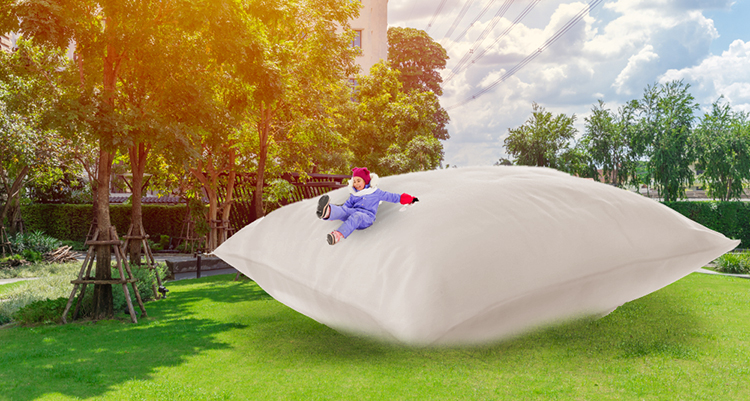 COUNCILS across the country will shortly begin ripping out dangerous playground equipment such as slides and swings, and begin replacing them with a revolutionary new ‘big pillow’ play system.

The new measure, which is completely edgeless and as soft as a kitten’s arse, is hoped to be enough to tackle the soaring cost of insurance for publicly accessible kid’s play equipment which has seen many play centers close their doors over the last few months.

With parents regularly making huge insurance claims when their kids suffer physical injury such as a booboo on the swings or emotional distress such as the slide not being fast enough, councils and businesses are now left with the choice between providing the public with something that no child could ever injure themselves on, or indefinite closure.

“From here on in, playgrounds will be re-named ‘stand perfectly still grounds’,” said a spokesperson for the ‘Keep Kids Uninjured’ campaign, which pledges to have Ireland edge-free by 2021.

On top of the new measures, all adventure Zones’ will now be just called ‘Zones’, bouncy castles will fitted with harnesses to make sure nobody gets higher than 1 inch off the ground, swings will be renamed ‘stationaries’ and roundabouts will remain unchanged, except kids will simply walk around a circle painted on the ground.

SLOWLY. Kids will walk slowly around a circle painted on the ground.