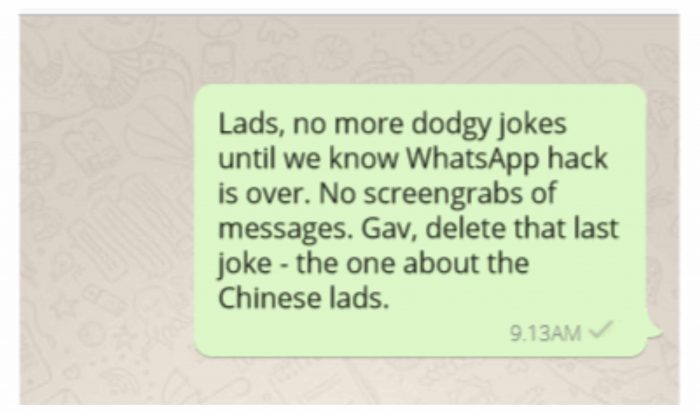 VARIOUS circles of friends, made up of affable lads who love the banter and can take a joke, have been in crisis mode following the news that WhatsApp, their go-to app for sharing all the racist and sexists jokes that would get them fired if they were on Twitter, has been hacked and the promise of ‘end to end encrypted messages’ no longer stands.

While waiting until they can be sure the app is properly secure again, lads have been busy firing out warnings on other messaging services to ensure none of their harmless banter is leaked or hacked and seen by people with zero sense of humour.

“Lads, I’m on FB Messenger here cus WhatsApp is after getting hacked. We’ve no idea if the hack means people who aren’t part of our group can see the content so I’m invoking the emergency protocols. Don’t panic, we’ve trained for this, everything will be alright,” urged one WhatsApp user and all round solid fella, Kieran Collings, as the members of the ‘Footy Bantz’ group set about trying to permanently erase all evidence of the group’s messages from their phones.

“After we’ve deleted all the racist videos, racist harmless banter, the funny racist memes and the disturbing amount of pornography, maybe we should throw in a few messages on the group about each of our birds, ya know, nice shite, just in case it can be seen by someone or it leaks,” offered another group member, Jack, as he frantically erased all 1,200 images and longform text jokes in the group.

“Who’s admin on this one again, should we just erase the group?” offered Gav, who is the admin, before being shot down by Kieran who said that erasing a group would only arouse suspicion.

After all sexist and racist content is deleted the lads plan on making a start on deleting content on the ‘Dermot’s Stag’ group which doesn’t include Dano, Liam or Chunk, the ‘Minge Rating’ group only Kieran seems to post on these days, the ‘What’s Conor McGregor Done Now’ group and the ‘Proper Footy Bantz’ group which has all the properly truly horrifically sexist and racist content and doesn’t include Gav anymore because he’s a dry shite and gives out too much about the harmless jokes.