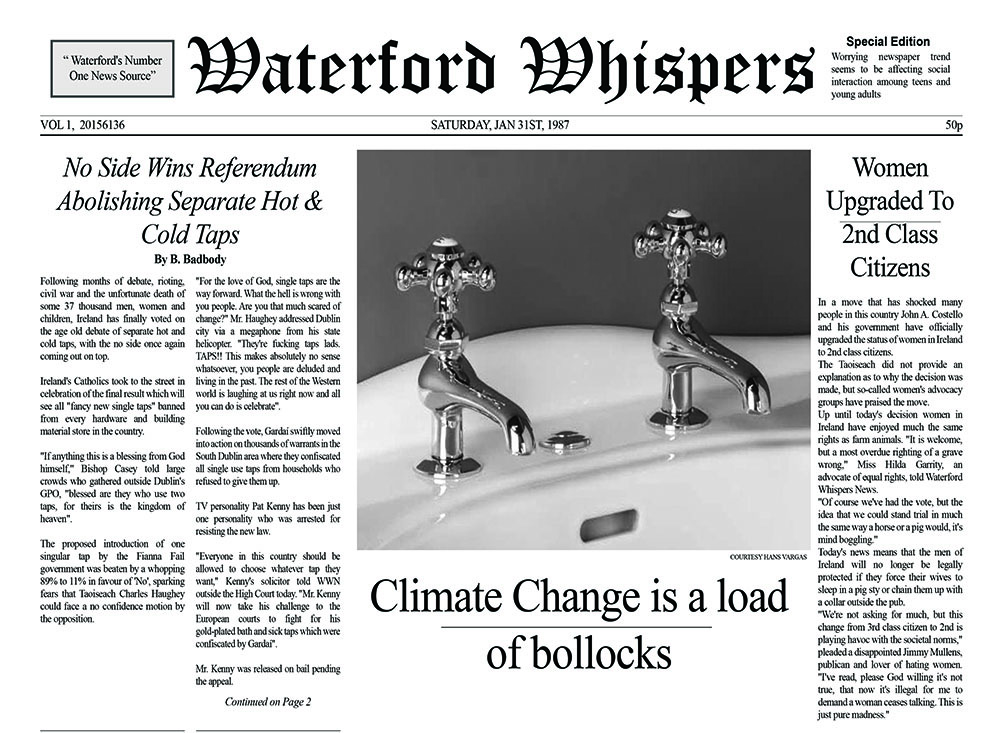 Following months of debate, rioting, civil war and the unfortunate death of some 37 thousand men, women and children, Ireland has finally voted on the age old debate of separate hot and cold taps, with the no side once again coming out on top.

Ireland’s Catholics took to the street in celebration of the final result which will see all “fancy new single taps” banned from every hardware and building material store in the country.

“If anything this is a blessing from God himself,” Bishop Casey told large crowds who gathered outside Dublin’s GPO, “blessed are they who use two taps, for theirs is the kingdom of heaven”.

The proposed introduction of one singular tap by the Fianna Fail government was beaten by a whopping 89% to 11% in favour of ‘No’, sparking fears that Taoiseach Charles Haughey could face a no confidence motion by the opposition.

“For the love of God, single taps are the way forward. What the hell is wrong with you people. Are you that much scared of change?” Mr. Haughey addressed Dublin city via a megaphone from his state helicopter. “They’re fucking taps lads. TAPS!! This makes absolutely no sense whatsoever, you people are deluded and living in the past. The rest of the Western world is laughing at us right now and all you can do is celebrate”.

Following the vote, Gardaí swiftly moved into action on thousands of warrants in the South Dublin area where they confiscated all single use taps from households who refused to give them up.

TV personality Pat Kenny has been just one personality who was arrested for resisting the new law.

“Everyone in this country should be allowed to choose whatever tap they want,” Kenny’s solicitor told WWN outside the High Court today. “Mr. Kenny will now take his challenge to the European courts to fight for his gold-plated bath and sick taps which were confiscated by Gardaí”.

Mr. Kenny was released on bail pending the appeal.