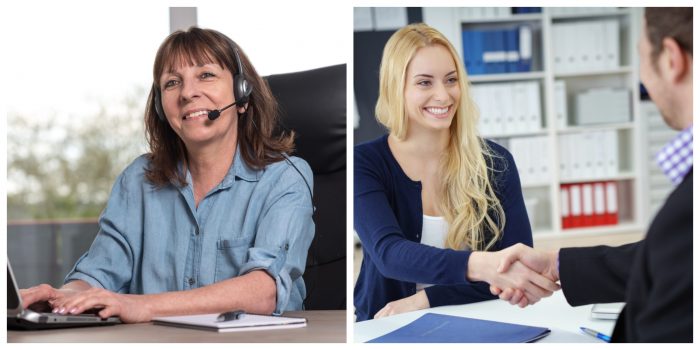 A 56-YEAR-OLD receptionist working in a Dublin office has slowly been phased out by her employers on the grounds that ‘a young woman with perkier tits is needed front of house’, WWN has learned.

Careful to discuss their desire to dispense with the ‘old bag’ on reception in an undocumented fashion, management at Ganley PLC conducted all meetings regarding replacing Margaret O’Connor with a younger and less capable ‘stunner’ in a nearby cafe.

“If we put any of this in an email, she’ll have a case with HR, that’s why we’re here,” shared employer Richard Hanelly-Morgan with his other directors while sitting in Starbucks, “remember, we’re pushing the ‘we need a change of culture’ angle whenever HR kicks up a fuss, say something like Margaret still hasn’t got used to the new internal comms system or whatever”.

“If we get a young cracker in there who happens to have enough experience, grand, but I’m stressing my ability to have someone to fantasise about during meetings is top of the agenda, nice longs legs, pretty face,” Hanelly-Morgan added, instructing all job applicants without photos attached to their CVs to be discounted immediately.

O’Connor, the 56-year-old reason behind the need for the company to downgrade to someone based solely on looks, admitted to WWN she only had herself to blame.

“There’s not much I can do, is there, this is my own fault in fairness, serves me right for being born in 1962,” O’Connor, frustrated at the fact her employers have covered all their tracks before purposefully discriminating against her.

Hanelly-Morgan later confirmed that a 20-year-old woman he could dream about leaving his wife for was to start work on Monday, enabling many aspects of the business to function less efficiently as a result.