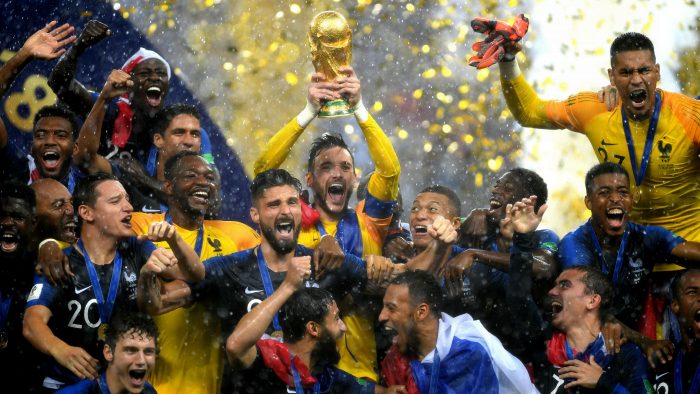 After 64 games, 169 goals, 1 England going home and 14,578 Neymar dives the World Cup came to a close with France beating Croatia 4-2 as the football Gods refused to punish the French for the Hand of Frog.

Kickoff to the World Cup final was delayed by 14 hours as Will Smith and some lad called Nicky dragged the arse out of the closing ceremony, trying their best to look like they weren’t singing the shittest song ever composed.

A thrilling game of open, end to end football brought the curtain down on the 2018 World Cup. There were amazing scenes in Dublin with French and Croatian fans celebrating on O’Connell St, however, this was interrupted by a bigger parade of joy with hundreds of thousands of people celebrating never having to see that fucking Maroon 5 ad again.

There was some Irish interest on the day of the final as Conor McGregor, who once posted online about voting Yes in the Marriage Equality referendum, cosied up to Vladimir Putin, who finds homosexuals abhorrent and will put you in jail for stating being gay is ‘normal’.

This incident has forced hundreds of die hard McGregor supporters to quit their jobs and turn defending him in comment sections online into a full time pursuit.

The game itself had it all, an own goal, a penalty, stunning strikes from both teams, an awful goalkeeper error and soon-to-be-jailed-for-the-rest-of-their-lives pitch invaders.

Croatian goalkeeper Subasic had to pick the ball out of his net 4 times after using up all of his goalkeeping powers in multiple penalty shootout heroics and his save of the tournament, preventing a certain Harry Kane goal in the semi finals.

Brian Kerr fans upset that he wasn’t chosen to commentate on the final by RTÉ were delighted when reports of him driving around Dublin with megaphone shouting ‘that was only a dribbler of a shot’ and ‘he absolutely blemmed that one’ into people’s sitting rooms.

Despite Modric and co’s best efforts, ultimately with tired legs they were no match the attacking prowess of France as Mbappe, fleet of foot throughout, starred. And it also turns out Paul Pogba is actually a professional footballer capable of playing well, despite what Eamon Dunphy and yer mate John are always saying.

The international umbrella shortage affected the final as record low yields of the umbrella crop saw the only remaining umbrella in the world reserved exclusively for Vladimir Putin.

Elsewhere, FIFA have started an international search for the one camera operator in the world who is capable of pointing the camera at someone lifting the World Cup trophy and not having lads in suits walking by ruin the shot.