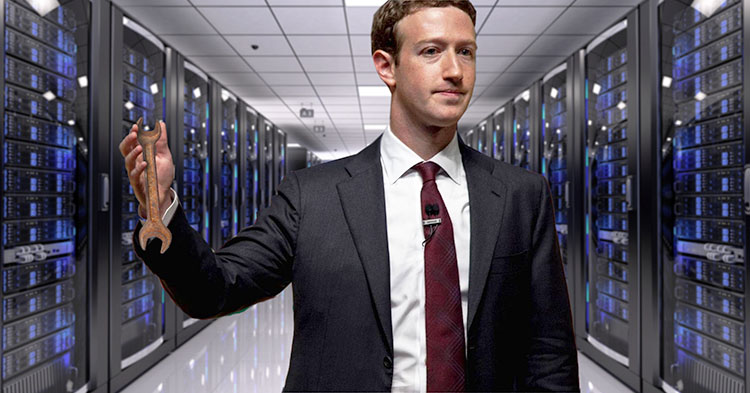 FOLLOWING months of pressure from some of the world’s leading nations and security agencies, Facebook CEO Mark Zuckerberg has finally gotten to the bottom of the social network’s problem; a rusty old wrench stuck wedged in one of its main servers.

“It must have been in there since 2010,” the 31-year-old posted, with a picture of the shocked looking CEO holding the metal tool responsible for years of social media malpractice.

“You have no idea how stupid I feel! To think the poor Russians were getting the blame for everything, and all that mismanaged data being blamed on us too, if only I checked the main server years ago, there would have been none of this”.

The size 14 spanner was later linked to former maintenance operator Gary Jones, who is believed to have carelessly left it embedded into Facebook’s main server over 8 years ago when he was installing the servers. It is understood the wrench had somehow short circuited the Facebook algorithm, causing the majority of all its problems.

“I was looking for that wrench everywhere,” Jones later told police, before being charged with professional misconduct.

“I take full responsibility for everything; Trump, the data harvesting, selective censorship, privacy violations, I’m so sorry,” he added.

Following last night’s find, the Facebook Newsfeed returned to ‘2010 normal’ in just a matter of hours, with users finding their personal feeds flooded with friend status updates about their interesting lives along with some funny, but very dated videos about cats.