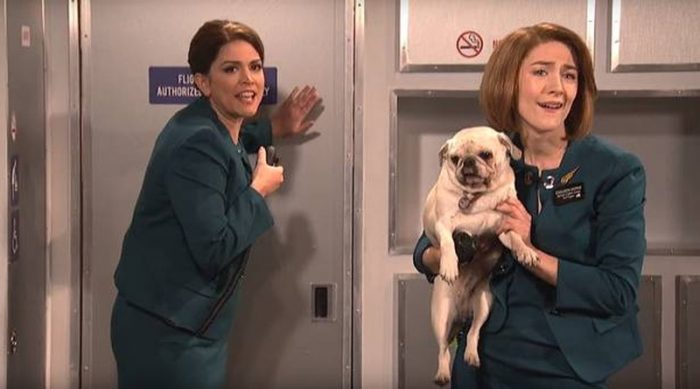 AFTER THE EXPLOSIVE Saturday Night Live sketch featuring Saoirse Ronan which literally dug up the corpses of Famine victims and laughed maniacally in their faces, you may be asking yourself; is something I should care about?

Luckily, WWN is on hand to whip you into an almighty frenzy that results in your blood pressure hitting the roof, but more importantly, convinces you to click on our news publication’s article.

Where to begin? Saoirse Ronan hosted SNL and partook in a crap sketch about Aer Lingus. And when we say crap, we mean it basically said Guinness from abroad tastes better than Guinness in Ireland while punching Michael D Higgins in the face.

No, that’s Saoirse Ronan, betrayer of Cu Chulainn and Mother Eiré. The one who was in that Galway Girl video, which we know you might think we published 43 articles on praising how good it was, but you’re mistaken. We’ve always hated SNL and her, and so should you.

Oh, okay, but what if she wins the Oscar this year?

Pretend like nothing happened and scour the internet to make sure no Brits are claiming her as British.

Are we not passed all this stuff?

Tell me more about the sketch.

That’s good, ‘cus we’ve about 9 follow up articles on this that you’ll be conditioned into clicking on. Like a collection of tweets detailing the ‘best’ reactions to the sketch, that’s going to be a humdinger.

Ah fuck, I’m after watching it there. I know deep down it’s pointless to care, but at the same time, fuck those lazy writers

Yes, that’s it, let the raging fever course through your body.

And to think, you shared one of their videos earlier in the year. Now, they’ve made you look like a fool. Delete that there off social media to cover your tracks, but not before you get a bit angrier. Jesus, the accents!

Shit I forgot to pick up the kids!

No, wait, we’ve a Daily Telegraph article to show you about the border, which quotes a minor fringe politician that we’ve puffed up to make it look like they’re actually important.

No, I mean like, I should have picked them up 3 hours ago

I just blacked out there for a second, has anyone seen my kids? I sat down to watch a video three weeks ago and I haven’t seen them since

Sorry, can’t help you. Can we interest you in this tweet from an American who thinks Cork is in France?

Don’t miss our EPIC article later on the EPIC Aer Lingus response to the sketch!!!