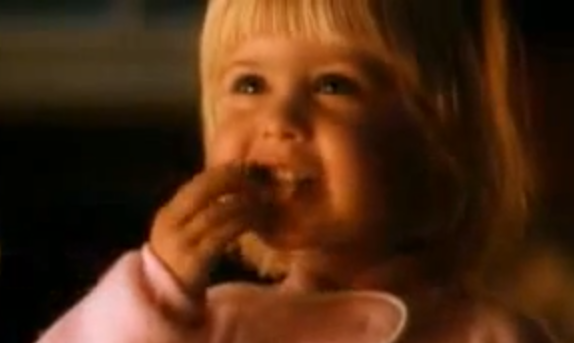 WE All know the ad: it’s Christmas eve, and three pajama clad kids creep downstairs to leave a bowl of Kelloggs Corn Flakes out for Santa Claus. They soon succumb to tiredness, and miss out on seeing the big man himself tuck into an ice-cold bowl of flakes… except for the littlest one, an angelic little girl who recognises Santa and shares his bowl of cereal, giving him a heartbreaking “ho ho ho” before dozing back off to sleep.

Originally hitting our screens in the late eighties, the ad has become as synonymous with Christmas as the Budweiser Clydesdales, the Coca-Cola truck, and the visit to your grandparents’ grave. But whatever became of the cherubic young girl who ho-ho-ho’ed her way into our hearts?

It may come as no surprise that the “little girl” in question is in fact played by more than one actress; this is common in Hollywood among child stars, such as the twins that played Ben Gellar in Friends, or the fact that Jodie Foster is in fact three people.

Taking the role of “youngest child” in the Corn Flakes ad was none other than 8 identical siblings, the famous Harrison sisters who were known as the “Iowa Octuplets”.

Born in 1984 in Des Moines to a mother who immediately died, the Harrison sisters Kaylie, Annabel, Marissa, Holly, Shelly, Nicole, Hannah and Nicole 2 were chosen for several Hollywood roles due to the ability to maintain an on-set presence throughout the day. If one octuplet got tired, the directors just went to the trailer and got another, giving producers an incredible flexibility that doesn’t normally come with child actors.

In the case of the Kelloggs ad, the shoot lasted three straight days without a break, and not one of the Harrisons was on set for more than an hour at a time.

Following the now famous commercial, work for the Harrisons was plentiful. Kaylie, Nicole and Nicole 2 went on to play Fox Mulder’s abducted sister in flashback episodes of the hit series The X-Files, while Marrisa, Shelley and Hannah teamed up to play grizzled, take-no-shit cops in the blockbuster Badges Of Fury series.

Annabel Harrison, known as the absolute bitch of the litter, was the first to quit show business in 1995 after a dispute with Martin Scorcese on the set of Casino, in which she called the veteran director “nothing but a big set of eyebrows”.

In 1996, Holly Harrison was left at a truck stop by accident one day and never heard from again.

Acting roles dried up for the Harrisons at the turn of the century, with most people tiring of their cutesy “ho ho hos”. Kaylie attended culinary school and went on to have a very successful career in food choppage, while Nicole and Nicole 2 merged together to form Nikki, who became a bounty hunter.

Less happy are the tales of Marissa and Shelly, who moved to Las Vegas in a bid to become poledancing strippers with severe drug and alcohol problems. However, this dream would never come true, and both found themselves happily married to successful businessmen before years of incredibly successful online entrepreneurship, which saw the pair listed on the Forbes “100 Richest Women In America” list ten years in a row.

Of the remaining Harrison octuplets, it was only Hannah who agreed to speak with us. As there was only room for one name on the Kelloggs contract, Hannah is the only one of the sisters who ever received any sort of payment for her work in the commercial, and still receives generous payments every year when the ad hits the air. We visited her plush home in upstate New York to catch up with her.

“Life has been good to me,” said Hannah, curled up on the floor behind her sofa as we interviewed her from a chair beside a roaring fire.

“My sisters, well, I don’t see them as often as I should. Sometimes if I miss them, I angle two mirrors together and just look over and back really quickly. Would you like some Corn Flakes? They send me like, a thousand boxes every year”.

We decline politely, and leave. Hannah calls after us as we go.