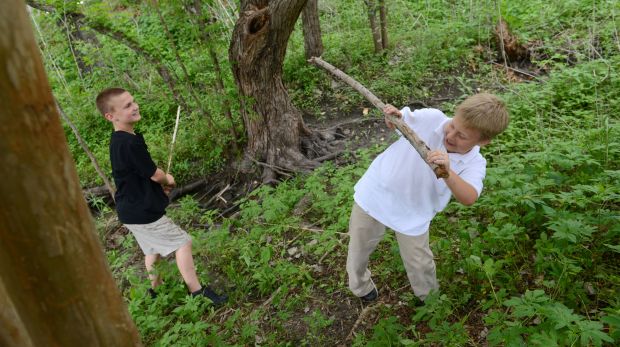 A DEFIANT group of children have weighed up the great time they’re having right now against the apparent threat of eye loss, and have decided to continue their fun & games until such a thing actually occurs.

Martin Lennon, 9, and his twin cousins Jack and Harry, both 8, have spent the greater part of the day in the backyard of Martin’s Longford home.

The trio have engaged in a great number of activities, ranging from stick-fighting to stick-throwing, with intermittent pauses for conversations as to who the best Skylander is.

The boys have received frequent warnings from their parents about the possibility that one or more of them will lose an eye if they aren’t more careful, but the young adventurers have opted to continue their fun and games despite the accompanying risk of ocular trauma.

“Statistically, we’re fairly confident that none of us will lose an eye,” said Martin, described by his parents as ‘a bit of a gurrier’.

“We’ve heard the whole spiel about how we’re going to do ourselves harm, but we just don’t buy it. We’re not novices, we’re trained stick-players. We play with sticks all the time, stones too. We’re coming off a full summer of stick-based fun & games, and we’ve still got six eyes between the three of us. So yes, the fun and games will continue, and we’ll deal with any eye-loss as and when it happens”.

Lennon went on to add that he knows his mother’s line about not coming running to her if he gets hurt is “a pure bluff”.