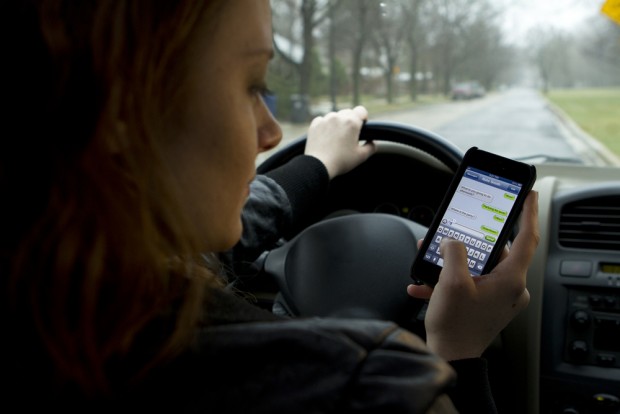 EVERYONE knows that using your mobile phone while driving is extremely dangerous, and can lead to accidents, casualties and death. Which is why you should only check your phone under the following circumstances:

Driving requires all your skill and concentration, most of the time. But there are times when you can look at the road ahead and say with a fair degree of certainty that nothing is going to happen for the 10-20 seconds it takes to see who just texted you. A kid hasn’t run out in front of your car in years, so statistically you should be grand while you let the lads know you’ll be ten minutes late.

Bit iffy on checking your phone while driving? Just wait until you’ve come to a stop at a junction! Here you can browse your social media profiles at your leisure, with pretty much no fear of anything bad happening. And hey, if you miss the lights turning green, you can rest assured that someone behind you will beep you. This will allow you to pull off nice and snappy, and remember that in the initial driving-off period you can finish off whatever you were doing while stopped, because nobody ever needs to really concentrate 100% on the road while leaving an intersection.

3) When on a motorway

We can see why people are so against motorists using their phones while driving on quiet country roads, which twist and turn, requiring your full attention. But motorways are basically a straight line, and you barely need to steer the car at all. Granted, you are travelling at a much higher speed and if you did crash, it would kill or maim many, many people, but that’s why there’s rumble strips on motorways: to warn you that you may be veering into traffic while trying to type a destination into your Google maps app. You’ll be fine.

If you’ve recently updated your status on Facebook or posted a tweet, then you’re perfectly entitled to check how much attention it has gotten you while driving anywhere, at any time. Just posted a comment on an article online? Failing to keep up with that kind of thing could be disastrous! So keep an eye on it, no matter what danger that might put you or other road users in. There’s not a court in the land would convict you!

If you’re driving to an event, you need to let the world know. And a picture of yourself in a car that clearly isn’t moving will only rouse suspicion among your online followers! So it’s important to snap that selfie while the car is in motion. Likewise, if you have an idea for a vine, GIF, or short video or yourself and your pals singing, joking around, or scaring a sleeping passenger, then go ahead and shoot that clip! This is your one chance to create an ‘hilarious video’ which can be shared online and bring you untold internet fame! It doesn’t matter that you’re driving through a residential area: seize your opportunity!