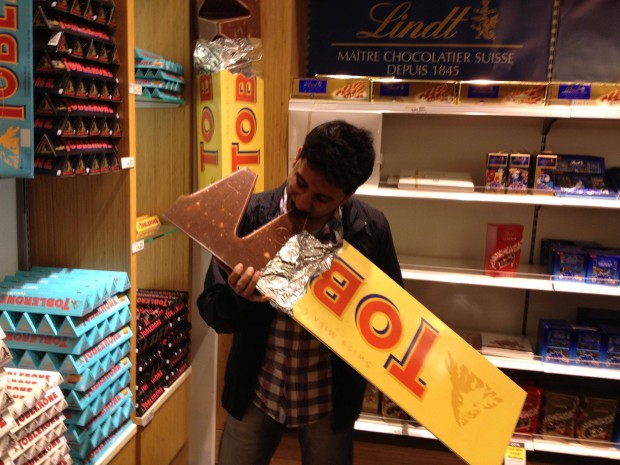 ANYONE who has ever visited an airport has left it with one pressing question: what’s the deal with all the big Toblerones? Over-sized bars of the triangular confectionery have long been available exclusively at airports, and nowhere else. Just why are airport shops so keen on selling you a kilo of honeycomb flavoured chocolate?

The recent controversy regarding airport shops requesting to scan customer’s boarding cards before allowing a transaction have raised concerns over just what they want your travel information for.

Although there have been allegations that retailers can pocket significant VAT savings when selling to customers travelling outside the European Union, the truth is that they need to collect as much data as they can about the people who buy goods before setting off on journeys: specifically, people who buy Toblerones.

The chocolate used to make Toblerones is of a much thicker consistency of regular milk chocolate, and when combined with high amounts of nougat and honey, are easily detected by sonar waves.

This means that a big enough bar of Toblerone can be spotted by search teams using sonar equipment underwater in the event of a plane crash.

By scanning your boarding card before you make a purchase of a three-kilo Toblerone that you’re never going to eat, airport authorities can keep a database of how much Toblerone is on each flight. Should a flight with 186 bars of Toblerone go missing over the Atlantic ocean, search teams will be able to set their equipment to look for just that.

Black Toblerones, the ones with dark chocolate, are even denser and can show up on satellite imagery.

Up to now, retailers in airports have insisted on scanning everyone’s boarding card regardless of what they’re buying in a bid not to draw attention to the Toblerone air/sea rescue initiative, and so have faced allegations of exploiting tax loopholes for personal gain. Anyone who has kicked up over this should offer then an apology at once.