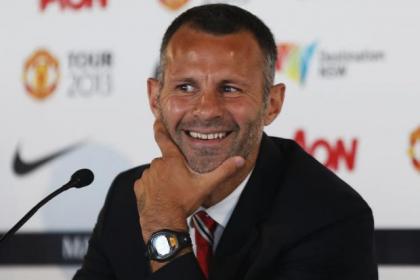 The debut press conference of interim Manchester United manager Ryan Giggs turned up few surprises, but the reestablishment of a women’s team certainly came out of the blue.

“I’m as surprised as you, but he made a compelling case for the new team,” vice chairman Ed Woodward told WWN exclusively.

“When Ryan was asked to manage the team after David’s departure, we expected it to be a quiet few weeks around the club outside of all the press speculation but Ryan had other plans.”

Woodward went on to explain that Giggs made an impassioned plea for the need of a young, fit and attractive footballing side in Manchester and that he thought a women’s team would fit the bill.

“He made a power point presentation and everything, talking about how he would oversee transfer and recruitment policy. Starting with his immediate locality as he had already identified a number of targets,” explained Woodward.

“He went on at great length about Yoga pants, the beauty of them and how they have helped to stimulate his off the field exercise regime. If I’m being honest, he kind of lost me on the yoga pants, but the 347 pictures of women in yoga pants was appreciated nonetheless.”

It is expected Giggs may divert all his attention to the women’s game as he expressed his confidence in the first team.

“The lads know what to do, but the women may need help with the bedding in process, it’s a tough transition at what is a big club. I will make myself available 24/7 as I’m sure most managers do,” explained Giggs.