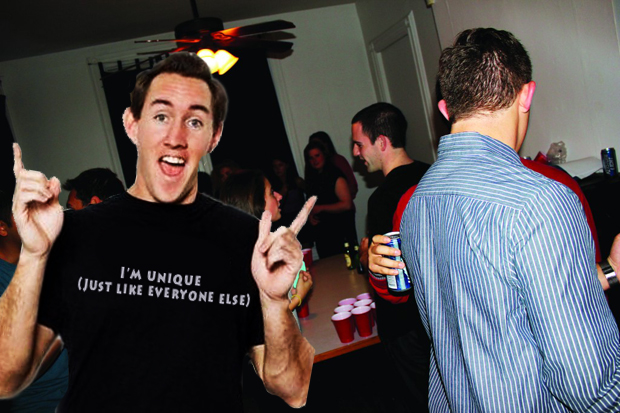 A 22-year-old Galway man was declared ‘the life and soul’ of a student party held in the city last night.

WWN can exclusively report that Simon Drummond or ‘Drummy’ to his friends arrived at a party on Sylvan Avenue dressed in a T-shirt with an amusing slogan emblazoned on it. While Drummy thought nothing of it, guests attending the party responded in raucous fashion to what they described as ‘a man who clearly laughs in the face of convention’.

“When I saw him I said to John beside me ‘That lad must be fucking gas’ ‘cus like else would you wear a slogan T-shirt?” NUI student Colm Duffy told WWN.

Duffy, who was throwing the party, admitted the vibe went from ‘normal’ to ‘class’ after Drummy’s arrival.

“When you throw a party you don’t think about these things, but yeah, I’ve probably just thrown the greatest party I will ever throw and it’s all thanks to that lunatic. Did you know he asked people if they wanted to play a drinking game? Absolute nutcase!”

Drummy took to the middle of the kitchen shortly after arriving in an effort to secure fridge space for his 6 cans of Bavaria. It was from the kitchen Drummy would secure his reputation as ‘a right mental bastard’ as his T-shirt was seen by countless party goers.

“I didn’t care for him much now myself,” confessed student and Drummy’s new arch nemesis Dave Hickey, “once I saw him talking to Amy, well, I felt like a right fool in my plain slogan-less blue T-shirt. You can’t compete with that promise of guaranteed hilarity, can you?”

WWN reached out to Drummy for comment, but instead got his voice mail which begin with ‘Hello Drummy here…hello? Hello? Only messing, it’s the fucking answering machine ya gobshite’.

Sources close to Drummy have revealed this isn’t the first time he has worn a slogan T-shirt and he may in fact own multiple T-shirts along similar lines.

“Ha-ha, he’s hilarious is dreamy. Did you know he dressed as Fr. Jack for Halloween once? Classic Drummy!” shared our source.

Drummy is believed to have had as many as 5 of his 6 Bavaria cans before kissing a girl thus cementing his status as ‘life and soul of the party’.