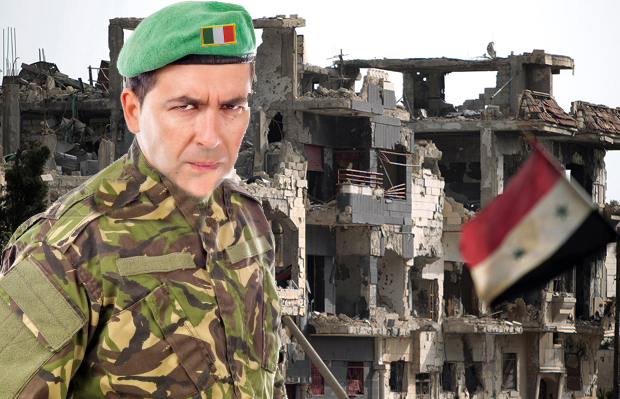 Next month, soldiers of the 44th Infantry Group will be deployed to the volatile Golan Heights area as part of the UN Disengagement Observer Force (UNDOF). Irish forces will be tasked with observing the Syrian civil war, fully in keeping with Ireland’s present neutrality.

The 129 soldiers are currently in the middle of intense final training ahead of their deployment as part of UNDOF and WWN can exclusively reveal some details of that training to the Irish public.

While the soldiers are already well versed in operating in dangerous war zones as part of a peacekeeping force, they are now believed to be receiving the most modern and up to date training relating to keeping the peace.

“Irish forces have been practicing their ‘throwing dirty looks’ technique with the help of the leading experts,” Captain Frank O’Brien told WWN exclusively, “we are trying to prefect our menace with these looks, in the hope it will make Syrian forces and rebel forces reconsider partaking in the civil war”.

The soldiers are believed to have a number of ‘dirty looks’ to choose from including ‘Dublin scumbag’, ‘Limerick scroat’, ‘What do you mean last orders was an hour ago’ and ‘I’ve just had a drink of sour milk’.

“We’re hindered by our neutrality in respect to keeping civilians safe, but wait until you see some the stares you would be getting from our troops. Top class stuff. We’re finding a lot of success with picturing a driver cutting across your lane in traffic, it brings on a lot of rage,” concluded Captain O’Brien.

It is widely acknowledged that in lieu of bearing arms, they’re allowed to fire or being able to adhere to rules of engagements, these ‘dirty looks’ represent the most valuable weapon available to Irish troops as they bravely and selflessly seek to play their part in bringing about a peaceful resolution to the war torn region.