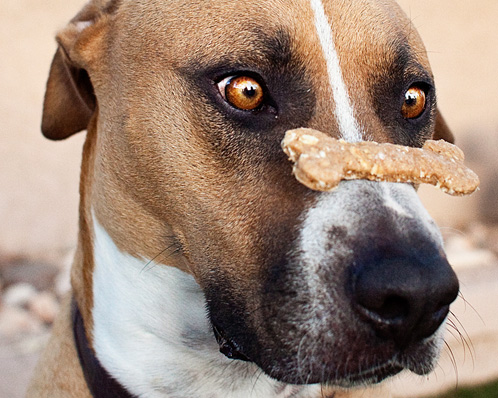 A Kilkenny woman is reported to have received as many as 42 Facebook likes for a picture of her dog Baxter balancing a treat on his nose.

Baxter, a 3-year-old mastiff, is depicted in the photo as a study of concentration – waiting patiently to be given the permission to devour his post-walk treat.

Rachel Miller, a 32-year-old mother-of-two, hit upon the idea of balancing a treat on her dog’s head after seeing a similar photo on a popular Facebook page.

However, she carried out the photo-taking completely unaware of the psychological impact this sordid mind game was playing on Baxter.

“Who’s a good boy? Who’s a good boy?” probed Rachel, never revealing the answer to an inquisitive Baxter. Rachel reached out her hand with the biscuit treat while urging Baxter to ‘stay’ fully aware of his near uncontrollable desire for the Pedigree Jumbone treat.

Leading animal experts believe balancing a treat on a dog’s head for the owner’s amusement causes mental distress equivalent to the shock felt by a human when their food fails to drop out of a vending machine.

“The anguish is on par with the most extreme of human suffering,” explained Dr. Peter Hoot, “if you’ve ever been left a bag of coal at Christmas you’ve experienced 10% of the devastation felt by a dog who is asked to pose with a treat on its head. You present a dog with a Rorschach sketch – 9 times out of 10 times they whimper as they picture that treat balanced atop of their head. It will lead to the disintegration of self. We have asked the UN to step in to stop this poor treatment, but thus far they remain silent,” concluded Dr. Hoot.

One Facebook book friend of Baxter’s owner Rachel commented on the popular photo, noting that it was ‘so cruel’ to which a callous and maniacal Rachel responded ‘LOL, I know’.