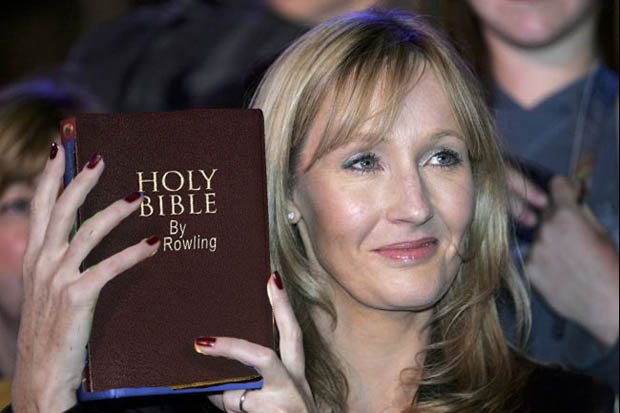 The latest PR coup for Pope Francis has seen him hire famous and revered children’s author JK Rowling to rewrite the Bible.

It is hoped the author, most famous for her Harry Potter series, can make it more accessible and believable for a new generation of Catholics and Christians.

While the specifics of the rewrite are not yet known, it is believed Rowling is tasked with producing a compelling tale that young Catholics and Christians can engage with. Figures such as Dementors and other popular creations may take the place of less realistic Biblical creatures such as unicorns and the leviathon.

“We are very happy Miss Rowling has agreed to the rewrite, we keenly await the first draft,” a Vatican insider told WWN.

Rowling’s selection has raised some eyebrows, but the decision by Pope Francis to select the wildly popular author is mainly due to commercial concerns.

“The sales of the Jesus Christ action figure have dropped by over 200% in the last 10 years, we are in need of new, compelling and toy-friendly characters…like the dinosaur in Toy Story,” a source close to the Pope told WWN.

“Our revenue streams are shrinking so the more Hollywood-esque the better,” the source concluded.

Rowling has thus far remained tight lipped on her vision for the Bible and its merry band of characters, but a number of Hollywood producers are in discussions to turn it into a movie.

In the last century, many Christian leaders have offered revisions on the interpretations of many of the Bible’s passages, but Rowling is expected to take a more drastic approach.

“Judas is probably going to wear a leather jacket and JK is toying with the idea of a nervous twitch or even an eye-patch. Also, why have one book when can have more? She is thinking of splitting it up into 9, maybe 10 books” the author’s publicist shared with WWN.