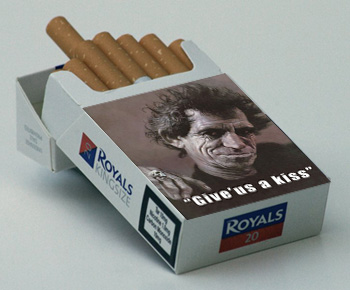 THE European Commission has called for shocking close-up pictures of Keith Richards face to be used on cigarette packets in all EU countries.

Unlike the written health warnings already used across the continent, the pictures need not be made compulsory throughout the EU.

“Governments have the right not to force cigarette companies to use them. We realise these images are quite disturbing and may not be acceptable in some of the more squeamish countries like Switzerland and Belgium.” said chairman of the commission James Nesquik.

Fresh looking young people with flawless skin are being particularly targeted in the campaign. One series of pictures even shows a very ill Richards hocking up some phlegm and graphically posing with it on the end of his wrinkled tongue.

A caption saying: ‘Go on, give us a kiss’ will run across the bottom of the pack.

Chairman Nesquik stated that ‘People need to be shocked out of their complacency about smoking. I think there is nothing more frightening than seeing that poor mans smoke torn face. It’s actually horrifying.’

Keith Richards face has been a familiar sight in similar anti-drugs campaigns in central Asia. Indian research into the value of such illustrations revealed they convinced 67pc more drug users to give up using.

Mohammad Petal, chairman of the campaign in India, said: “This was the most successful drug campaign we have ever seen in India. Not only did people give up, 34pc of them took up regular exercise and joined some kind of religion.”

“The pictures have a profound effect on people.”

According to experts, Keith Richards face has over 300,000 wrinkles. Most of which were caused by chain smoking. It is believed at least 20 grams of cocaine can be stored in Richards face at any one time.

The Keith Richards warning pictures are due to hit the hidden tobacco shelves in July 2014.