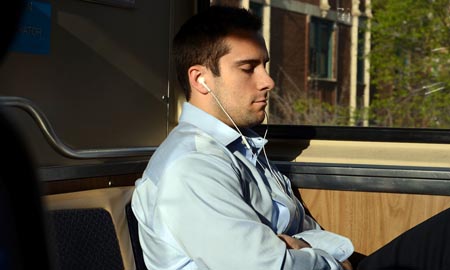 Unbeknownst to you, during your daily morning commute into work, a fellow passenger was having what people commonly call ‘a moment’.

As the window next to you fogged up Paul contemplated the futility of making human connections, considering we’re all but tiny brush strokes on the vast canvas that is life in our universe.

While you tucked into a banana Paul, with his music on full volume, thought of the children in Africa and how ridiculous it is we pay more attention to Miley Cyrus. ‘Like she smoked a spilff in Amsterdam, that was a bit of an obvious move if you ask me’ thought Paul.

As your bus passed by Donnybrook bus station Paul looked as if he was going to cry, but was jolted back to reality as the driver white knuckled it through an amber light.

‘We’re basically packed sardines being ferried in and out of town as we earn money for people we’re probably never going to meet’ Paul thought as he successfully deconstructed the basic tenets of western capitalism.

As your bus pulled onto to St. Stephen’s Green Paul brushed off you as he left his seat.

“Sorry,” Paul said, but what he really meant was ‘God, if only we could talk without the pretense of wanting or needing something. All our communication is born of function, necessity and selfishness. My name is Paul God damn it and wish to be loved’.

Completely unaware of all this, you had a good chuckle when Paul tripped on an exposed brick as he descended from the bus.