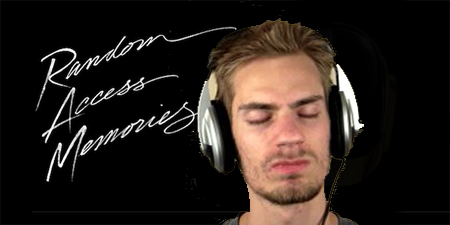 The 33-year-old Waterford man believes the recurring seventies funk rif throughout the album, will ‘grow on him eventually’, and slammed his conscience for thinking it was a lazy arsed effort to recreate a tone of music no one really enjoyed in the first plac

“You just have to listen to it over and over again until you finally get in the zone.” he told WWN earlier. “You can’t expect it to catch you straight away.

“Daft Punks music is not meant to do that.”

Mr. Hogan said no one should judge the album until they have seen the videos for the music.

“Everyone was saying the same thing about the discovery album.” he went on. “Then they released the funky cartoony space band videos, and the rest was electronic music history.”

The father of none, who spends countless hours making his own tunes on music programmes that no one else will ever listen to, said he has faith that Random Access Memories will be one of Daft Punks best albums to date, and denied the French electronic music duo were losing their ‘mojo’.

“No way have they lost it man. You just haven’t heard it enough times.” said the agitated fan, who was now listening to the album again with one earphone.

“Give it a chance and play it a few hundred times and I guarantee you’ll love it.”