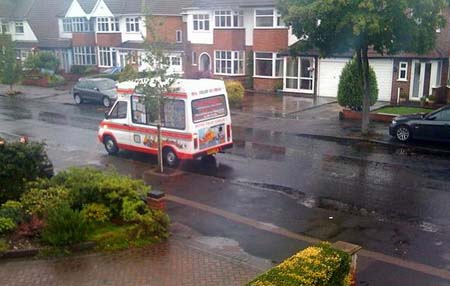 EVERYBODY living in housing estates across the country have claimed the annoying bastard ice-cream van guy is just ‘taking the absolute piss now’, it has emerged this week.

Hundreds of thousands of people have slammed the ill-timing and general existence of the truck drivers, claiming ‘they only drive around to annoy residents who just sat down from work.’

More than 67% of the complaints were related to late evening calls that disturbed the viewing of such programmes as Eastenders and Coronation street.

The remaining 33% claim ice-cream van drivers were being smugly ironic and just ‘rubbing in’ how bad the Irish Summer really is.

One distraught home-owner told WWN he was sick and tired of his children bugging him for money during his favourite TV programmes: “That pied piper son of a bitch and his mobile music box is lucky that every time he calls its raining, otherwise I’d run out and strangle the cunt!”

Hostility towards the self-employed businessmen has hit epic proportions in Ireland, where it is estimated there are over 500 ice-cream trucks in operation.

One driver, who wished to be named only as Mr Whoppy, admitted the job was not for the faint hearted.

Driving an ice-cream van was named as one of the most annoying jobs in the country, coming only second to selling charity scratch cards outside post-offices on pension day.