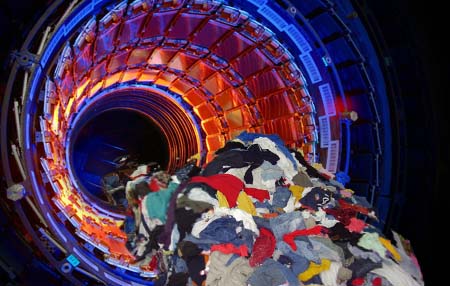 HUNDREDS of millions of odd socks were said to be among just some of the strange items discovered in the large Hadron Collider this week, scientists at the CERN facility have claimed.

Teams at the LHC, the £2.6 billion atom smashing machine near Geneva, held a press conference yesterday stating that they had found a new sub-atomic particle “consistent” with the Higgs boson along with various other unexplainable finds.

Staff estimate there are over 789 million odd socks scattered along the 27km circumference of the collider wall.

Chief scientist at the centre, Dr. Morgan Rickets, believes the materials were probably inter-dimensional and have been missing for quite some time: “Its probably no coincidence these items are the most common types to go missing on a daily basis.”

The results are preliminary and more work is needed before the scientists can be sure where exactly the odjects came from.

“We believe there maybe a direct link between the source of the Higgs Boson particle and the ‘missing finds’.”

Scientists have not ruled out the possibility of a  fourth dimension portal which may have been opened while searching for the ‘God Particle’.

“It looks likely that we may have found a dimension where all lost things go.” he added.

When asked if there was a connection between domestic washing machines, a fourth dimension and the Large Hadron Collider, he replied: ‘At the moment it is too early to comment.’

However, washing machine manufacturer Hotpoint were said to have approached the patent office this morning with their plans for an inter-dimensional portal machine that also washes clothes.