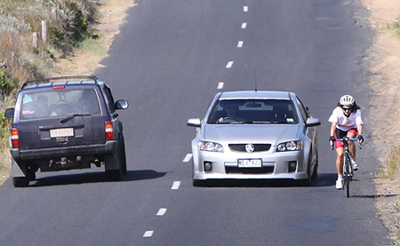 A COUNTY Waterford cyclist has admitted today that the only reason he travels from A to B is to annoy other road users.

Michael Power explained that the majority of cyclists across the country have been conspiring against motorists for years.

When asked why he does it he replied: “It’s fun I suppose. I just love cycling side by side with my friend and taking up the whole lane. We just ignore the traffic behind us and laugh our arses off at their frustration”.

Shockingly, the 37-year-old told WWN he also drives a motor vehicle when he goes to work and that cycling is ‘just a hobby’.

“I know it sounds strange but I do own and drive a car. People are taken aback when I tell them,” he explained, “the dangerous liaison between the two has given me a sort of double life so to speak. Trust me, I’m the first one to beep any cyclist off the road if they get in my way. But that’s because I know what’s going on”.

Mr. Power also admitted that he is part of a thousand strong cycling network who hold regular meetings to arrange the disruption of traffic.

“We’d meet every second week or so. Usually we’d organise an attack for a Sunday when most drivers are already hungover and agitated. The trick is to go in groups of two and have a good mile between each group”.

“Drivers would already start beeping and revving their engines by the time they get to the second group”.

The Tramore road cyclist stated he prefers being in the final group as it is more exciting.

“Yea, people are usually pissed when they get to me. I love it though,” he added.