“We nearly got you this time, we really did,” CIA Director Gina Haspel remarked at this week’s failed coup d’état attempt in Venezuela funded and instigated by the American intelligence agency for the second time in 20 years, with first coming in 2001 which failed to topple Hugo Chavez. Director Haspel’s jest comes after Nicolás Maduro claimed his troops… Read more » AS THE INTERNATIONAL community’s endorsement and support for self-proclaimed Venezuelan president Juan Guaido continues, and criticism of American led interference in the affairs of a sovereign nation grows, WWN appeals to its readers to conclusively improve the circumstances of the Venezuelan people and solve the unrest by calling each other ‘evil capitalist cranks’ and ‘stupid… Read more » 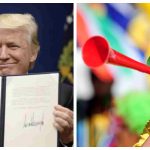 SHOUTING down a number of his most experienced White House aides and advisers, US president Donald Trump has reaffirmed his intention to impose sanctions on vuvuzelas. Decisive action by the president will see the nuisance drone-like noise-making plastic horns face a number of onerous sanctions which would cripple its economy were it not just a… Read more » US PRESIDENT Donald Trump has called on the people of Venezuela for calm following spiralling tensions in the South American country. Addressing acting Venezuelan President Nicolas Maduro over his decision to close the country’s embassy and consulates in the United States, Mr. Trump appealed for reason, stating “Just give us the fucking oil and gold reserves or we’ll Gaddafi your… Read more »