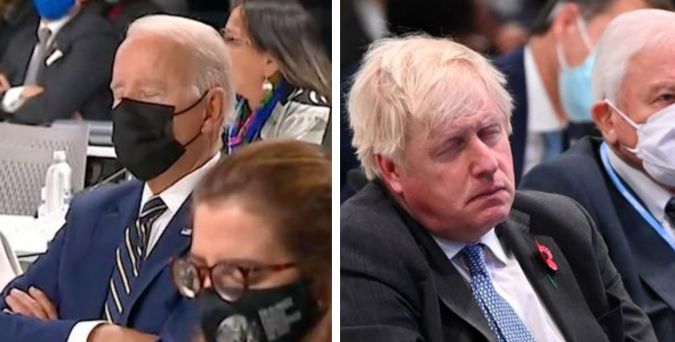 TRYING to correct the record on images from day one of the COP26 climate conference which showed the leaders sleeping through speeches about how political leaders are failing the planet, Joe Biden and Boris Johnson confirmed they were in fact in a dream ‘mind meld’ with one another.

“We were trying to workshop solutions to climate disaster while in a shared dream. No, not buying that? Okay, we were in Facebook’s metaverse, yeah that’s it,” explained Biden, of the images which perfectly summed up the inept leadership which has brought the planet to the brink.

“We’ve cut taxes on flight and I’m okay with pipes spewing shit in our waters but you can trust me to get this climate stuff sorted,” added Johnson who can’t be trusted to have the commonsense to wear a mask while seated next to 95-year-old David Attenborough.

Earlier, COP26 got off to a rocky when an angry head of the sea delegation, Poseidon, impaled several leaders from the land dwelling contingent with his trident for what they’ve done to the world’s oceans.

Meanwhile locals have told world leaders they are in line for a ‘Glasgow kiss’ if they don’t start taking climate issues seriously.

Elsewhere, a grave warning has been issued by large corporations that generate the majority of carbon emissions, who stated efforts to save the planet will have a devastating impact on their shareholder’s profits.