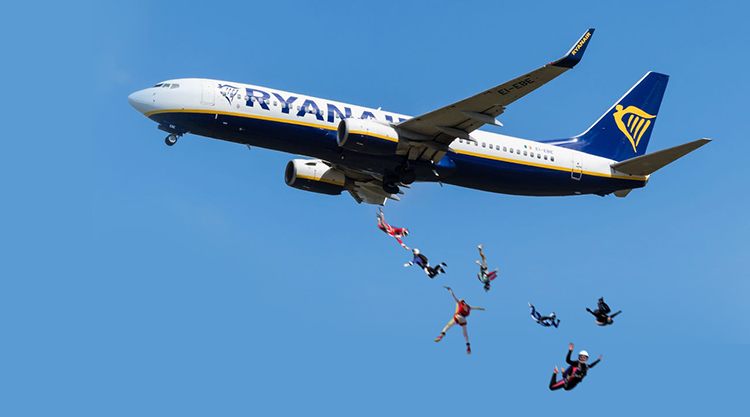 “PASSENGERS for Tenerife, assume positions behind the yellow line!” bellowed a flight attendant on Ryanair’s inaugural flight to all of the Canary Islands in one go.

“Red light, attach cord. Green light, jump! On three, go go go!” they yelled, as forty passengers carrying their luggage dove out the back of the plane, while the pilot circled left and headed for Lanzarote, where 37 more people were due to make a high-altitude exit.

“It wasn’t working out for us to send half-full flights to destinations, to adhere to Covid regulations and the like, So we thought okay, what if we just loaded people for several destinations into the plane at once, and dropped them in the airspace of their intended country?” said Erick Harmunstun, architect of Ryanair’s new system of paratravel.

“We use idiot-proof parachutes like in WW2, all you have to do is fall. The chute opens itself, and a GPS-enabled warning gives you that Ryanair trumpet blast when you’re ten feet off the ground and it’s time to brace. Now you’re in your destination country, and you’ve avoided hotel quarantines, PCR tests, everything. We’re trialing it over the Canary Islands but next week we intend to fly to Paris, Berlin and Hamburg all in one go”.

Passengers have so far praised the system for allowing them to go on holiday with even less care for spreading Covid than usual, but have stated that they could ‘do without’ the flight attendant jumping out of the plane alongside them, attempting to sell them scratch-cards at terminal velocity.