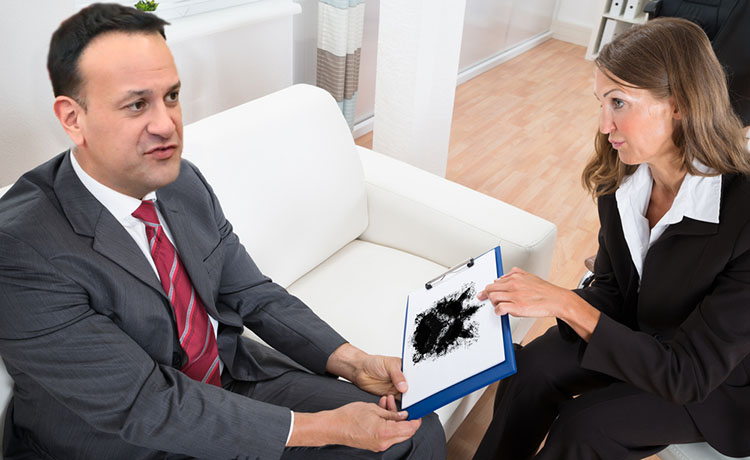 “I SEE a man with a beard, and glasses, surrounded by people in balaclavas” said Leo Varadkar today, after being presented with a Rorschach ‘ink blot’ image with the instruction to just ‘say what you see’.

“Mr. Varadkar, there are no ‘right and wrong’ answers with these tests, it’s just to get a glimpse at where your mind is resting” said the Tánaiste’s therapist, trying to find room on her notebook to add yet another ‘fuck me this lad is obsessed with Sinn Féin’ note.

“Let’s try another one”.

Over the course of an afternoon, Varadkar claimed to see images swimming in the black ink that resembled:

– Mary Lou MacDonald with ‘some form of rifle’, pointing directly at him and laughing.

– Pearse Doherty beside what looked like an arms dump.

– A JCB ripping an ATM out of a wall, being driven by Paul Donnelly.

– A 26-country Republic that looks just fine the way it is.

– Micheál Martin clutching his chest and slumping to the ground.

– A load of poor people on a boat sailing far, far away.

– Mary Lou MacDonald again, only this time her voice was that of an actor.

“But Mr. Varadkar, these are just pictures, you’re not supposed to be able to hear them speak” stated Varadkar’s doctor. “Let’s try something different. Word association; I’ll say a word, you say the first thing that comes into your mind. Let’s begin. ‘Kitten'”.

“An IRA car bomb sent to assassinate me but it accidentally kills all the homeless people in the country, reducing our figures to zero while I jump out of the way shouting ‘I told you this is what a vote for Sinn Féin would bring’ while looking really cool in a nice suit with my sunglasses on”, blurted Varadkar.