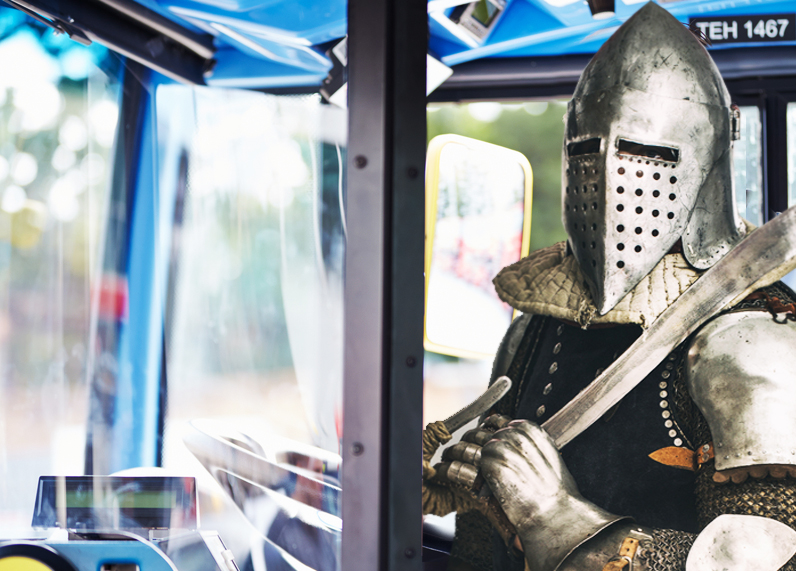 As of today, face coverings are now mandatory across the country, leaving it down to public transport drivers to make sure all passengers adhere to the new legislation.

“Me brother works in the local museum so I got a lend of this,” Dublin Bus driver Thomas Holihan explained a 17th century suit of armour that he was wearing, “I have to get up a bit earlier and it takes ages to get the sweet spot on the seat, but at least I won’t be beaten to a pulp in the process of enforcing the new rules”.

With all the onus being passed down to staff and the transport authority, operators have called on the government to supply them with some protection at the very least, given the already hostile nature of public travel.

“At least the racist passengers won’t see the colour of my skin through this, so there’s that,” said Waterford bus driver and foreign national Babatunde Eze, who also managed to find a suit of armour to wear with a fully shielded helmet, “I also brought my old machete, just in case anyone gets out of hand and tries to get on without a face covering”.

So far only 43 bus drivers have been verbally and physically assaulted since the new legislation was introduced this morning, just a 1% rise from pre-Covid, normal, everyday figures.

Meanwhile, Minister for Transport Eamon Ryan has not ruled out reintroducing wolves to public transport to deal with non-mask wearers.