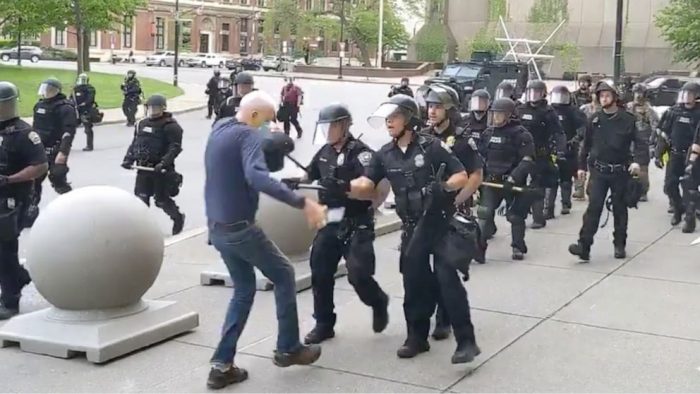 POLICE in the US have begun the long, hard road to reform today, with a freshly-minted pledge to mete out heavy-handed brutality in a fair and equitable fashion, with whites, blacks, Asians, Latinos, and whatever else getting the same big-stick justice from now on.

“The protests that we saw following the death of George Floyd have opened our eyes to the possibilities of a fairer police force” said a spokesperson for the US Justice Department.

“During these riots, we did not simply see black men getting held down and beaten, or shot on sight. We saw 75-year old-white men getting tossed to the ground. We saw 9-year-old girls getting pepper sprayed. Young men and young women of all races and creeds, shot in the face with rubber bullets. It showed us that we can do better. It showed us, that we must do better. This is progress.”

Across America, rank-and-file cops chimed in with their own vows to be more ‘colourblind’ when swinging their batons at peaceful protesters.

“Yo, you know before this week, I thought I could only whup black folks, but now I see that if I want to smash up some hipster chick in a BLM t-shirt that’s giving me shit, I can” said Officer Mark Allen, beaming with his new-found outlook on policing.

“I wouldn’t have shot that 16-year-old black kid last year if I’d known I would get the same lenient treatment for shooting a white guy. Well, I wouldn’t have just shot that black kid, I guess” said Sgt. Bill Powers, itching to get out there and get policin’.

“All lives matter” said Captain Morris Harris. “Well, they just don’t matter much to us. Wait, let me get this right. All your lives are worth the same from now on, as far as we’re concerned”.