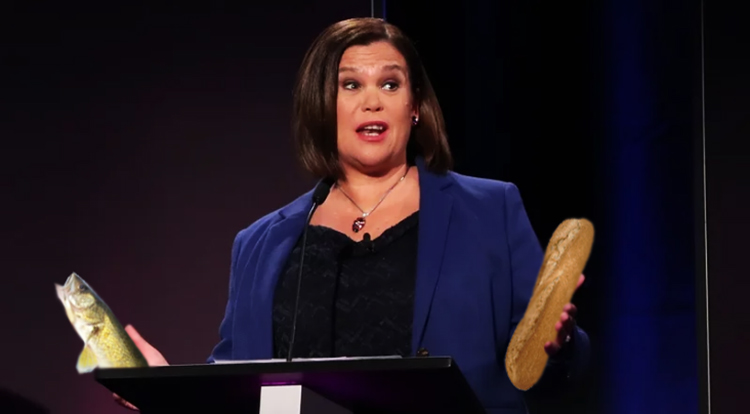 NEARLY 1,000 people attending a Sinn Féin rally in Cork yesterday were said to be ‘left not wanting for anything’ after miraculously being fed with just a handful of bread, fish and fresh promises, handed down by leader Mary Lou McDonald.

Making her way down the river Lee on foot, hundreds gathered to witness the former Fianna Fáil member calmly walk on water as rebel songs played softly in the background, presumably from IRA martyrs in the great Heaven above.

“Praise the Lord, the Messiah has returned!” shouted one spectator, desperate for change, anything that’s not Fianna Fáil or Fine Gael, “she’s going to clear the merchants and the money changers from the Temple, the insurers too, we’re saved, praise Jehovah we’re saved”.

Flanked by her disciples, Eoin and Pearse, the Sinn Féin leader dished out loaf after loaf, fish after fish, promise after promise, as the Corkonian crowd ingested every last single drop, crumb and policy.

“We’ll keep them for Dublin, Galway, Cavan and Newry,” McDonald thundered, smiling smugly at the thoughts of Leo Varadkar’s disdain for her ability to connect with people earning less than 50k per year.

“Cheaper childcare! 65 year pension! A United Ireland!” she yelled at the crowd, with some followers already showing signs of recovery.

“I’m healed!” said one over excited elderly man standing up from his seat before falling in a heap on the floor and breaking his hip, while a blind man celebrated having his sight restored by walking into a wall.