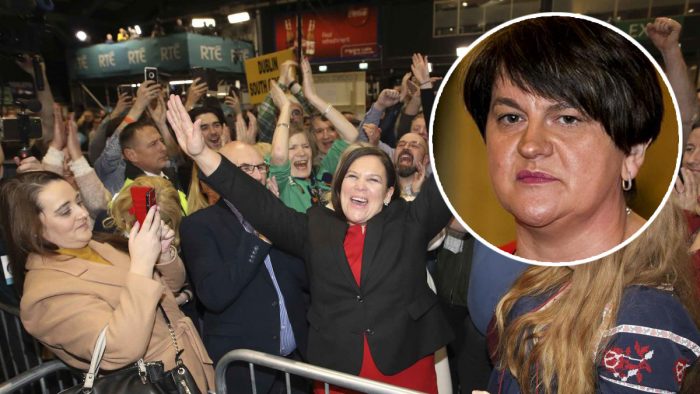 DUP leader Arlene Foster has taken to drinking Gaviscon straight out of the bottle this week, following a series of events that have caused her party ‘nothing but grief’, including the stunning general election performance of Sinn Féin in the Republic.

Crucified with the heartburn and getting by on less than three hours sleep a night, Foster has opened up about the pressures of leading the battered and bruised Democratic Unionist Party through a Brexit that saw them dumped by Boris Johnson’s government, witnessing Sinn Féin romp to victory and immediately beginning to jump start the process of unifying Ireland, ‘and now there’s gays getting married in the street and all’.

“A day off. Could I not get one fucking day off” mused Foster, alongside her party, watching news of the North’s first same sex marriage trending across social media.

“We’ve had a full week of the Taigs down south carrying Shinner after Shinner around on their shoulders in victory, everyone claiming Mary Lou McDonald to be one of the greatest leaders in the history of the island. You’ve the Unity referendum, only a matter of time away now.

“Brexit is done, so it’s a matter of time before the bus we got thrown under comes back and reverses over us again. And what else is on the news… Lesbians necking. And lads, it’s not even the middle of February yet. We’ve five months before we can even have a wee marching season to put a smile on our faces. Fuck this year, honest to God”.

Foster’s humour did not lift upon hearing news that UK Prime Minister Boris Johnson has commissioned plans to build a bridge from Northern Ireland to Scotland.

“He’ll build fuck all” fumed Foster, before heading out for a walk in the snow ‘where there’s nobody to piss her off’.