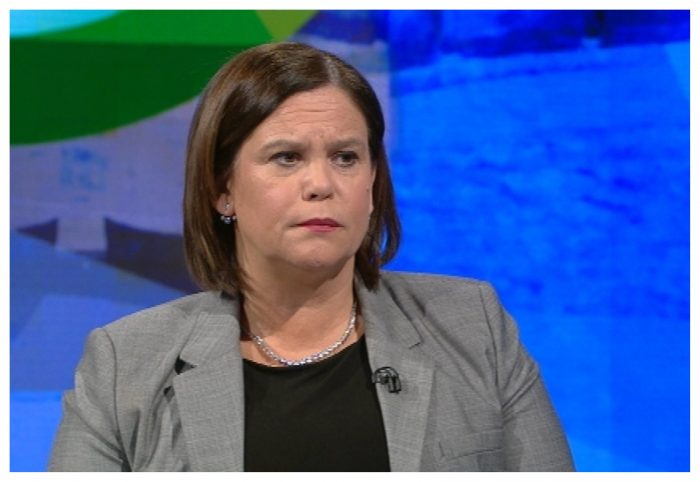 IF there’s been a breakaway star of the current General Election campaign it’s Sinn Féin leader Mary Lou McDonald, who only yesterday fielded a difficult batch of questions from RTÉ’s Brian Dobson in a sit-down interview.

“The IFA is an integral part of rural Ireland life and although people in urban areas may not realise it, the rights of farmers are very important to them too” stated McDonald with grace and poise.

Deputy McDonald was cut off by Brian Dobson, who clarified that he had not in fact asked about the IFA, asking if he needed her to repeat his question.

“Oh right, sorry, I thought you said IFA. Now, our position on the ICA? The Irish Countrywomen’s Association? Well as you may know, we’re champions for women all across Ireland, as we’ve shown in our support for the Repeal referendum, and as I’ve stated about the IFA, our pledge to support rural Ireland is…”

“I’m sorry Deputy McDonald” interjected Dobson. “The question I’m asking you is in regards to ongoing ties to the IRA”. |

“IDA? Yes, foreign investment is the lifeblood of the Irish economy, and the Industrial Development Authority will be fully informed of our…”

“Look, I’m more of a GAA woman myself, but if you like rugby, then it’s only right that a bespoke organisation like the IRFU is there to make sure that the game is available to all, and that kids of all ages have the facilities and mentorship to play at all levels”.

“PRSI payments for workers under the top band of tax will fall, creating newfound wealth among the more cash-strapped members of our society”.

“The blanket bank guarantee ruined this country. Banks like AIB received bailouts that the Irish taxpayer is still…”

“Filling out your CAO form? We’re dropping college fees. CIE should have more routes throughout the country to help people who need public transport. The FAI are a shower of bastards who couldn’t run their finger up their hole without instructions”.