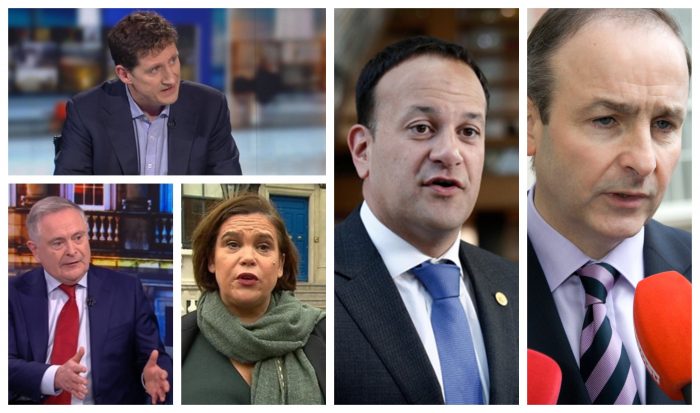 POSSIBLY the central issue at the forefront of the minds of a big section of the electorate, which is reflected by the fact political parties are all claiming to have the magic solution.

But just what are Ireland’s political parties saying and promising when it comes to housing? WWN has collected all the parties’ big ideas and policy proposals below, thankfully none of the proposals are fully costed so carry no threat whatsoever of being completely unworkable:

Vow not to change a single fucking thing you ungrateful shower of moany millennial bastards.

“I got a 100% mortgage at 24, so I don’t see why you can’t” confirmed the Taoiseach at the party’s housing policy launch.

“I know what it’s like to struggle to find somewhere to live. I too, like ‘a poor’, rent,” confirmed Minister for Housing Eoghan Murphy, who earns in excess of €98,000 a year plus expenses.

Pledged to continue artificially decreasing the number of people on the housing list with help of the HAP scheme, which paid out close to €1 billion to private landlords this year.

Will launch ‘Three Little Pigs’ insurance rebate for those with homes affected by the Green Party’s pledge to reintroduce wolves to Ireland.

Will require all construction sites to use bicycles instead of heavy industrial machinery.

Increase in grants offered to make your house more energy efficient and carbon neutral – €100,000 grant offered to home owners that build house made from bricks made out of quinoa.

Getting Saoirse McHugh on TV as much as possible instead of Eamon Ryan.

A nationwide rent freeze and a second cook book from Gerry Adams this time with the best recipes for when you’re killing and cooking the rich.

“Will kneecap every landlord in the country,” according to a spokesperson for Fianna Fáil and Fine Gael.

Increase in number of social housing units being built by the state not private developers*.

Discovering an alternative to travelling back in time to the Celtic Tiger Fianna Fáil have instead proposed the implementation of government savings scheme which would see people be given one euro for every three euro they save up until €10,000. Builders, estate agents and home sellers will in no way see this scheme as an excuse to further raise the prices of their properties.

Party have stated that introduction of a temporary ‘rent freeze’ would be unconstitutional and they have it written right here by their legal experts, but they can’t show you and anyway, you wouldn’t their legal experts because they go to a different school.

Party will introduce a ‘brown envelope freeze’ for 5 years, during which period of time they won’t completely lose the run of themselves.

Loads of houses will become available once 450 million foreign terrorists taking up all the room on the housing list are kicked out of Ireland.

Will ‘tell it like it is’ until housing magically appear on the horizon.

Make it legal to drink drive in rural communities. Unclear what this has to do with housing.

Move Ireland to Mars where there’s loads of land and you don’t even have to pay for it because nobody owns it.