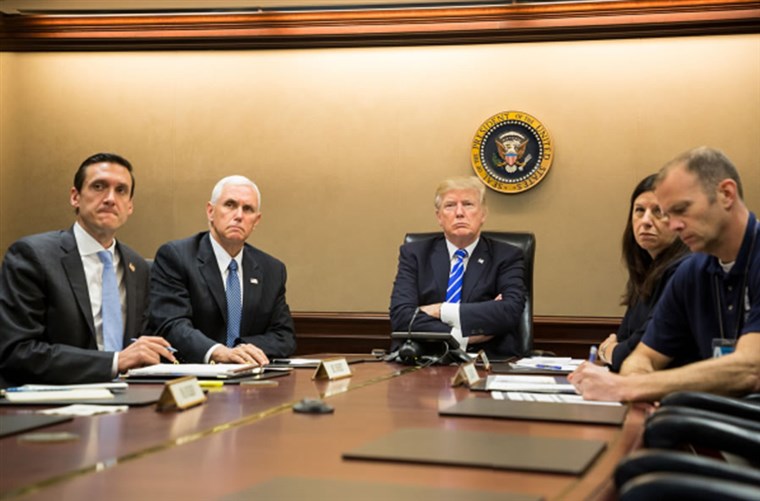 THE IRANIAN military has hit US bases in Iraq. Ballistic missiles fizzed through the sky on their way to making explosive impact on Iraqi soil, the Middle East, and political stability across the world.

When such catastrophic things occur, there’s only place you’ll find the president of the United States and that’s in the ‘situation room’.

Trump, surly at having been woken from one of his many naps, appears more sheepish than normal. Scared even, like a sickly rat who’s just been told it has to sit a test on astrophysics it didn’t study for. He crudely scribbles ‘war room’ in crayon and places it over the situation room sign. Things have become that bit more real, more urgent and perhaps more dangerous.

Trump wears a laminated copy of a doctor’s report detailing his Vietnam-era bone spurs around his neck at all times. He tugs on a blanket for comfort like some child who has lost his parents at the mall. We later learn the blanket was a gift from his father, who had stolen it from an African American family he once illegally evicted from property he owned.

The first thing that strikes us about the war room is the empty chairs. Trump asks an aide where everyone is, but he is reminded that he still hasn’t hired people to fill vital positions that would come in really, really handy given current news. Very unimportant positions like ‘Director of National Intelligence’, ‘Homeland Security Secretary’, ‘Head of ICE’, ‘Navy Secretary’ and ‘Undersecretary of Arms Control’.

On the wall hangs a large floor to ceiling length map, hung upside down, showing in great detail the nearest targeted McDonalds that will provide Trump with his breakfast, lunch, dinner and bonus dinner. Although they are a safe distance away down the corridor, the media can still be heard chanting ‘Do it! Do it! Do it! Do it!’

Footage of the assassination of ISIS leader Al-Baghdadi plays on repeat on a large TV. Each time a new official enters the room Trump casually mentions ‘oh ha, this is embarrassing. Do you see that? Someone has left the TV playing the video from that time I killed Al-Baddy Guy’. So far this morning, he has done this on 17 occasions.

One of the walls is lined with pictures of former presidents. Trump, irritated by the site of a Barack Obama picture, orders it be to turned around to face the wall. Perhaps in a bid to summon courage or guidance Trump asks for the picture of Ronald Reagan, a man who illegally sold weapons to the Iranian Islamists in the 80s, to be brought to his side.

Trump’s most trusted and learned military strategist, his son Baron Trump, plays Call of Duty in one corner, sharing advice from fellow online players issued into his headset.

As Trump is bombarded with reports that contain no pictures, only words, he becomes overwhelmed. He keeps asking about ‘the rules surrounding the draft’.

He is reassured by a general that there is no conscription anymore and a president wouldn’t be forced to fight and that only a particular shade of people will have to die alongside the children of poor Americans. Trump responds “no, I was wondering if we could fix it so Eric is one of the first people to be sent to the front line?”.

Periodically, a White House aide presents Trump with a red button and he presses it enthusiastically in the belief he is setting off nuclear bombs. In a bid to ‘prove’ Trump is winning, US generals play montages from Hollywood war movies and run commentary like ‘oh boy, you really showed those Muslims!’ It’s unclear if Trump is in on the joke.

The war room, abuzz with chatter and activity up until now grows deathly silent as military officials ask Trump what the world’s largest army should do next.

“Think of the most short sighted, poorly thought through move that only a genius like me would be stupid enough to approve, and then go with that, only twice as worse” Trump bellowed with authority. And with that the officials raced to put his vague plan in action.

Now pale as a ghost and his hands shaking Trump whispered, barely audible, to one of his aides.